As part of The Glassblock’s sponsored partnership with the New Hazlett Theater, we are presenting a series of editorially-independent previews and reviews of the 2016-2017 Community Supported Art (CSA) Performance Series. Below is our review of Over Exposed by Lindsay Fisher, a collaborative response from arts and culture editor David Bernabo, guest panelist Johanna Lasner, and a secret guest reviewer. Read Lasner’s bio below, and read our preview of the performance here. 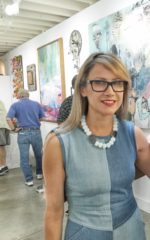 Johanna Lasner is a curator and artist with formal studies in photography and interior design. Prior to moving to Pittsburgh, she lived in the United Kingdom, Canada and the Caribbean. During her time in Pittsburgh, she has worked with Casey Droege Cultural Productions covering projects such as SIX x ATE, The PGH Photo Fair and CSA PGH, also The Carnegie Museum of Art, and GalleriE Chiz. She recently curated the Ramin Project, by artist Aurora Zanabria, in her native country of Ecuador. Lasner’s passion for community has taken her to participate in sociocultural projects such as Canadian Mill Woods Assembly Medical Mission in Guatemala, Latinas Connect, and Madres Latinas of Pittsburgh.

A figure cloaked in light on an otherwise dark stage kneels front stage right, folding her hair into a ballet bun. “I have been evaluated on my appearance since I was a child,” a disembodied voice announces. “My first memory of criticism regarding my body was when I was 15.”

Lindsay Fisher, a Butler native, has returned to the area after building a career in the often cutthroat New York dance scene. She has worked with celebrated dance companies—Helen Simoneau Danse, Nathan Trice/RITUALS, Carolyn Dorman Dance Company—and performed works by famed choreographers like Twyla Tharp, Jiri Kylian, and Ton Simons. Her decision to work as a freelance dancer instead of with a company afforded her this variety of experiences, but that decision was also accompanied with a lifetime of judgment, especially as directed toward her physical appearance.

With Over Exposed, the April 6, 2017 performance at the New Hazlett Theater, choreographer and dancer Lindsay Fisher aims to reveal previously hidden layers of herself by letting the audience peer behind her curated, public image. In coping with the ever-present external judgement, Fisher learned to turn inward, hiding her insecurities. Now, Fisher promises the audience her “uncensored story.”

In a pre-performance interview with The Glassblock, Fisher disclosed, “There’s part of me that thinks there’s something really beautiful about exposing our scars, exposing the things that are less flattering—because they’re also the reason we are the person we are.” Over the course of the sometimes jarringly eclectic 85-minute program, Fisher breaks down those walls, guiding the audience through personal stories of rejection, partnership and divorce, and contentment. 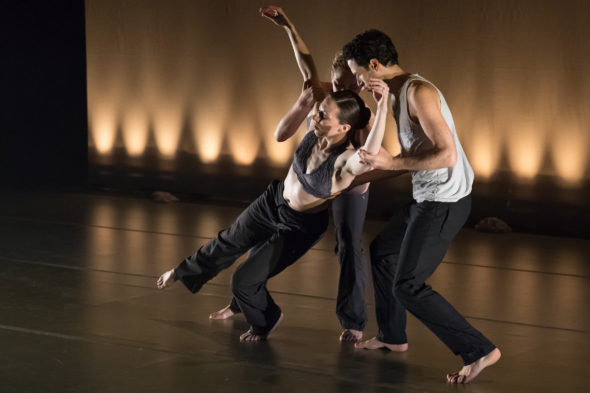 After the introductory monologue, a lighting change reveals three dancers on stage. Fisher, Matt Pardo, and Montana Michniak glide downstage in unison, politely interacting with the hard-edged house music that pumps from the speakers. Variation is the name of the game here as the trio marches up and down stage, gracefully sliding into floor work, approaching the audience with a pas de bourrée step, and, in general, making great use of the large floor space. From the start, it’s apparent that each dancer holds technical mastery over their craft. Fisher especially shines, beautifully and elegantly executing difficult dance steps with apparent ease.

Shortly after the trio section, the first use of video is introduced. On the immense back wall screen, a series of quick images of Fisher is projected, timed to a four on the floor beat. At first, the sequence is a nice stylistic break, an infusion of energy. The dancers do well not to distract the viewer from the video, interrupting still poses with periodic repositioning, creating just enough movement on the stage. But conceptually, the video passage becomes muddled. In the opening narration, Fisher explains that she often presents a curated image of herself, a projection of how a person wants the world to see them. The slide show video pairs these sanctioned images of self (professional dance photographs, views from the beach, poses that accentuate the strength of the body) with images meant to invade privacy (nearly nude shower shots and scenes from atop the toilet). In juxtaposing the beautiful with the extremely private, the viewer sees two equally curated views of the self. To be fair, there are shots of the mundane—coffee cups, lawn mowing, driving—but when the mundane and the extreme are shown in equal measure, the extreme grabs attention. A second viewing of the piece brought out the subtlety of this section, but upon first glance, the intention of this section was inconclusive. Loud and rhythmic, the scene is powerful, but the viewer can’t help but wonder if the slide show represents the curated self waiting to be exposed or the now-exposed self.

Following the video, in the style of a reality show confessional, the dancers approach a microphone and take turns divulging their insecurities, reliving experiences of being on the receiving end of insults and explaining coping mechanisms. As the stories intensify, reeling in the audience with the shocking conditions that dancers have to put up with to pursue their art, a video begins. With movement on stage, confessionals at the microphone, and the introduction of video, the audience’s attention frays, building tension in an effective way. In many of the monologues, we hear difficult stories told in a calm voice. Here, the live voices evoke more emotion and strike a tone more in line with the message. 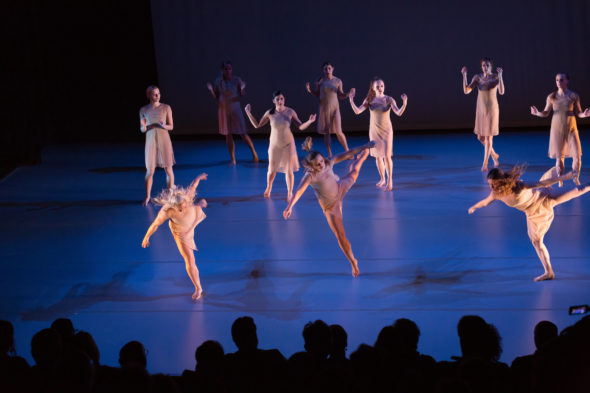 Throughout the remainder of the 85-minute dance, Fisher presents a wider span of styles and approaches. At one point, a large group of Slippery Rock University dancers emerges from darkness, slowly and gently gesturing on a stunningly lit stage, soundtracked by Arvo Pärt’s delicate Spiegel im Spiegel. Seeing ten dancers break in and out of unison, forming groups and sub-groups while traversing the stage, is a wonderful contrast to the trio of Fisher, Pardo, and Michniak. 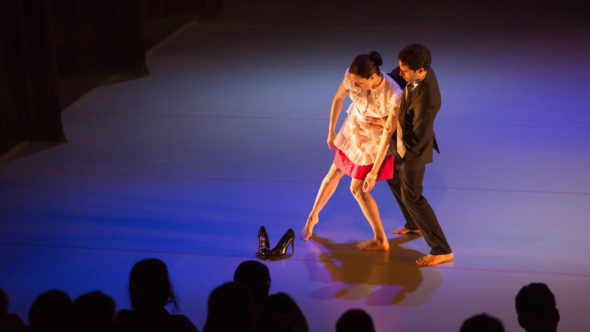 Later, after a monologue about divorce, Fisher and Pardo perform a lengthy, literal interpretation of a dissolving partnership complete with dinner, chairs, and a table. In a storyline that risks oversimplification, Fisher and Pardo bring out nuance in their characters’ relationship. In one of the evening’s highlights, Pardo, who dances beautifully throughout the piece, repeats one of Fisher’s earlier solos, creating a poignant moment that pokes at gender roles. Overall, the section is in at turns fun, poignant, and touching, but the major stylistic break—in movement, set design, and music—from the preceding sections of Over Exposed is jarring. In fact, the back half of the evening felt too eclectic, especially upon viewing the closing number, in which the stage is filled with dancers in what feels like a celebratory Target commercial.

Prior to the closing number, there is a gem of a duet between Fisher and Michniak. Against an ambient soundtrack that eschews a constant rhythm, Fisher’s precise and sinuous movement meets Michniak’s display of force. Starting with a series of sharp interlocking phrases, Michniak performs a solo that flits between high intensity and pause. The solo is made into a unison duo that plays with facing before diving into partner work. Untethered from pounding rhythms, the dancers inject more power into their movements, allowing the audience to extract meaning from the dance instead of the narrative.

In dance, movement is the primary mode of conveying information. It allows the audience to feel and interpret meaning that may lie beyond what we can say with language or figurative art. Given this, the power of movement can be diluted with over-explanation of themes embedded in the dance. Over Exposed is accessible, with many points of entry for different audiences, in particular in its various styles of recognizable music and a consistent narrative presence. But there may be a quality lost in that accessibility. The audience is instructed on the themes, led to associate certain passages with certain topics: the body, divorce, new beginnings. With impeccable dancing and solid production values, the piece certainly succeeds in exposing hidden layers of Fisher’s experience, but the lack of abstraction limits the universality of the message and thus limits the impact of the dance on the audience. Spaces of deeper abstraction, like in the Fisher/Michniak duet, provide an opportunity for an audience to reflect, to internalize Fisher’s message, and to have it grow roots in their own experiences.

The New Hazlett Theater’s 2016-17 CSA Series continues with the June 1 , 2017 performance of Kalopsia by Monteze Freeland. Look out for our preview in the coming weeks.