When she was four years old, Lindsay Fisher began taking dance lessons at a small studio in her hometown of Butler, Pennsylvania. Ten years later—thanks to her mother’s insistence, she concedes—Fisher had stuck with it. By high school, she was spending every night practicing until 11:00 p.m. “It became really obvious to me that this is what I wanted to do with my life,” she shared.

Inspired by another dancer who had attender her local studio, Fisher applied for Juilliard, where she was wait-listed. “I was a little heartbroken,” Fisher said, “but I generally believe that you end up where you’re meant to be.” So she studied modern dance at the North Carolina School for the Arts in Winston-Salem, where she was surrounded by faculty who were inspiring and driven, if not at times difficult to work with. After graduation, she headed to New York City.

Starting out with a small dance company, Fisher learned that performing one person’s work for a long period of time wasn’t for her. She dabbled in commercial work—she appears in the 2007 feature film Across the Universe, a musical romance based on the Beatles catalogue, and she’s performed for several music videos—but the bulk of her time was spent as a freelance dancer.

“Yes, that is as precarious as it sounds,” she told us. “A lot of people though it was crazy to leave a solid dance company to go in a more freelance direction. But the funny part now is that, given the economic climate and [financial] support for the arts, there aren’t a lot of jobs with dance companies anymore. There’s not a lot of work for modern dancers that’s 40 paid hours per week with benefits and touring.”

Though Fisher paints an all too familiar picture of today’s working artists, who must often piece-meal careers with pick-up gigs, for her, a freelancing career has also had a sort of upside, giving her the chance to work with different choreographers to become more well-rounded. Through her years in New York, Fisher received the experience that comes with variety.

What kind of experience? “Which would you like?” she volleyed back, smiling. “The experience where I lived with a nun in the East Village for two years to save money on rent?” 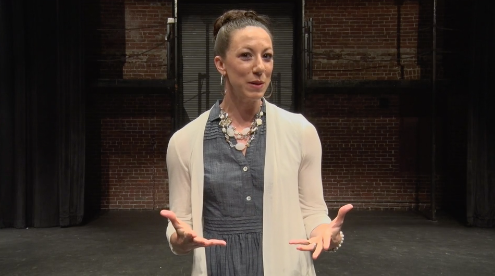 Fisher left New York to pursue her MFA at the University of Iowa, and it was there where she did some of her most fruitful creative work, digging to find she was drawn to the politics of gender identity and dynamics. With a degree in hand, Fisher returned to Pittsburgh and has taught in the dance departments at Slippery Rock and Point Park University, leading courses on both dance technique and choreography.

And her teaching work has given her opportunity to consider the relationship between the two. “Aside from being able to be technically proficient and contend with the material they’re given,” Fisher said, “dancers are often asked to contribute to the process. Of course I’m giving [my students] repertory and technique, but when I teach, it’s also about, how are you going to insert yourself so you’re not just a technician or a robot? How will your voice be heard in a group of twelve? How is your individualism going to help you navigate?”

In Over Exposed, Fisher’s upcoming performance as part of the New Hazlett Theater’s CSA Series, a number of her students will be dancing alongside her—there will be 22 performers altogether, in fact.

Over Exposed is a collection of works that explores close personal themes, portraying stories of real, lived relationships and grappling with the bizarre in them. Serving as the basis of one of the performance’s segments, titled “View from Inside,” is Fisher’s experience of the end of her first marriage—she found herself living in close quarters with her partner but feeling the most estranged. “Though we were living proximally, our emotional distance was so vast that I felt I was living with a stranger.” Fisher marveled at how this contrasted with the beginning of her relationship with the person who today is her husband: It began long-distance. “We were living in two different states, but emotionally we were really close.”

For Fisher, the highly, sometimes painfully, personal is a reserve of expression. “A lot of those times I have been really embarrassed, or told no, or have done something really stupid—those are the times I’ve learned the most, the times that have propelled me into something greater. … But there’s part of me that thinks there’s something really beautiful about exposing our scars, exposing the things that are less flattering—because they’re also the reason we are the person we are.” Ultimately, with Over Exposed, Fisher hopes to share pieces of her to stir something in us. “I wanted to expose areas I have spent years trying to hide, because I don’t think I’m the only one hiding them.”

Over Exposed debuts as part of the New Hazlett Theater’s CSA Performance Series on April 6, 2017. Learn more, and get your tickets, here.