Last August, we published the first installment of The Cost of Doing Business, an occasional series in which we invite creators, artists, and risk-takers at large to, in great detail, list the expenses and revenues involved in a creative project. Whether an art exhibit, a chapbook, or a cross-country tour, The Cost of Doing Business intends to reveal the frank financial particulars of creating in Pittsburgh.

For the second edition of our series, The Chamber Orchestra of Pittsburgh is dishing details on the surprisingly high costs of setting up a chamber music concert. We’ll turn it over to Edward Leonard, conductor and co-founder alongside Erin Yanacek, for more info.

We started The Chamber Orchestra of Pittsburgh in the fall of 2014. Pittsburgh has terrific chamber musicians, a world-class symphony, and a world-class opera, but the city didn’t have that in-between ensemble—the smaller orchestra that can play medium-sized orchestral pieces, both new and old. Since there seemed to be a vacuum, we decided to test the waters with a few concerts to see if there was an audience. We found that there definitely was.

For our first concert, we rented space at the Frick Art and Historical Center. Musicians donated their time; we made the concert free to the public. Our second concert was also free, but we raised enough money to pay musicians a respectable amount. Then, from July 2015 onward, we decided to pay union rates.

It seems to us that music is always the slowest art form to evolve, more so than the visual arts and literature. Because the rules of harmony and melody are so integrated, it is hard to move forward, completely breaking from past works, thus making music inherently reactionary. I’m all for new music, but it is also important to look back and see where the current music has come from. We often look to the classical music repertoire, and naturally it has become stale. So when approaching older works, I do so as I do a piece of new music, with freshness and a constant search for the special-ness of every moment of sound.

It’s interesting, and also easier, to program a newer piece with an older piece. We can grow audiences with that kind of programming, as people have their ears opened with pieces that they know and enjoy, and can now listen to newer works with that same sense of openness.

Our musician costs are high because we pay the union rate, which is unique for a smaller ensemble in Pittsburgh. Union rate means $100 per rehearsal per performer and a little over $100 per performance per performer. Typically, we are looking at 18 performers to play two rehearsals and a concert.

Many people don’t consider that it takes a lot of time to be a musician, even outside of rehearsals and performances. You’ve dedicated thousands of hours to get to the level that is necessary to perform. The union rate—we think it’s a fair fee. We only hire union players since it guarantees us quality musicians that we can count on. They have a real sense of pride by being in the union and earning that wage. We want to make sure that we don’t cut corners with the musicians: If anyone deserves money, it’s the musicians. The result of this philosophy is that we have a very dedicated core of musicians, including a number of symphony musicians.

The musicians are by far the largest cost—like 99%. As of right now, I’m conducting for free and working towards grants in the future to cover conductor costs. Others doing this work have told us that if you don’t start paying administration, you’ll hit a plateau.

To keep budgets lower, we try to do free publicity with free calendars: WQED, Pittsburgh City Paper, Tribune-Review, Pittsburgh Post-Gazette. Jim Cunningham at WQED has been really helpful and has conducted interviews with us about the concerts.

Since we are performing as part of the church’s Tapestry series, the First Unitarian Church of Pittsburgh provides the concert venue for free and actually pays us a bit of money.

It has been easier to request a donation at the door instead of adding complexity with pre-sold tickets.

We received a $15,000 grant from the Small Arts Initiative that covers one and a half seasons. This equates to about $2,500 per concert. Additionally, for this season, we received $10,000 in donations, again roughly $2,500 per show. So we’ve done pretty well so far. If we make no additional money this season, we’ll still be $8,000 in the black. That money will be put towards the next season. We will also contract someone to help with a strategic plan—grant writing, partnerships and relationships, an educational outreach program, and other big picture stuff.

There are some other ways that we reduce expenses.

Often, we use repertoire that has shifted into the public domain in order to save money. There’s a notion that in order to be different, you have to do new things instead of re-looking or re-evaluating old music. But there is a lot of wonderful music that hasn’t been widely performed. One of the pieces we’re playing at the next concert has been in a closet in Dresden for 350 years. Bassoonist David Sogg says it is “virtually” a U.S. premiere. We are also providing a Pittsburgh-based composer an opportunity to perform his music. It’s a way to skirt around costs, but it is a mutually beneficial arrangement.

David Sykut has been nice enough to record the concerts for free. In exchange, we promote his engineering business. He works at Seton Hill and does mobile recording and editing. During the Pittsburgh Symphony strike, he recorded any musicians for free. 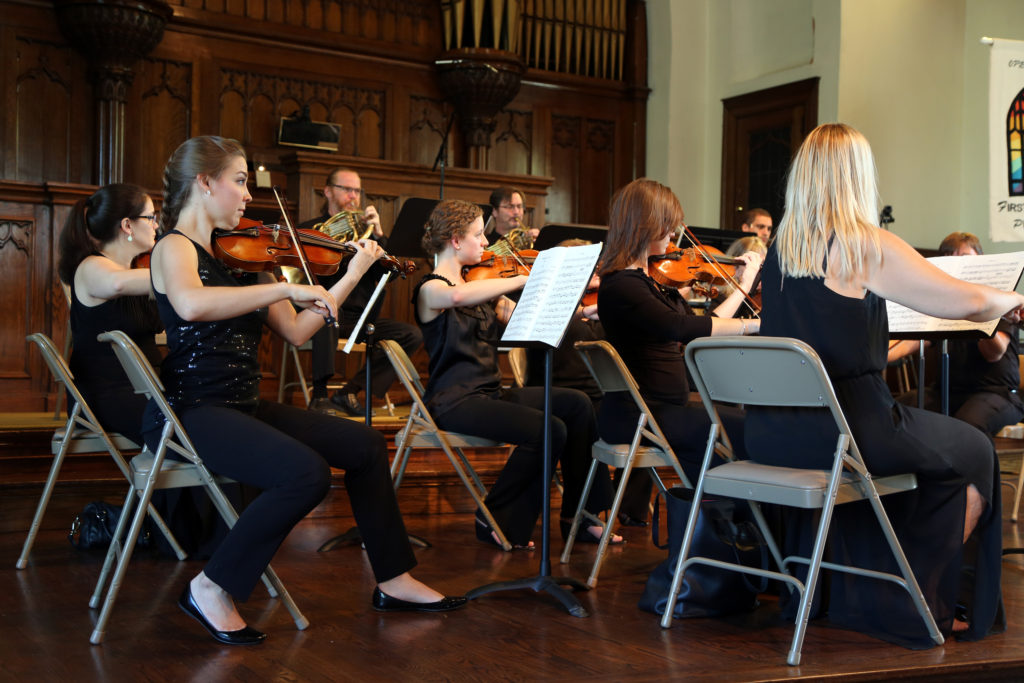 Stipend from First Unitarian Church of Pittsburgh: $375
Program Advertisements: $750
Donations at the door: $1,000
Grants and donations for the season: $5,000

Check out The Chamber Orchestra of Pittsburgh on February 5, 2017, 5 p.m. at First Unitarian Church of Pittsburgh, for the following program:

Concerto for Organ in G minor, Op4, No.3 – HANDEL
with Bill Larson, Organ