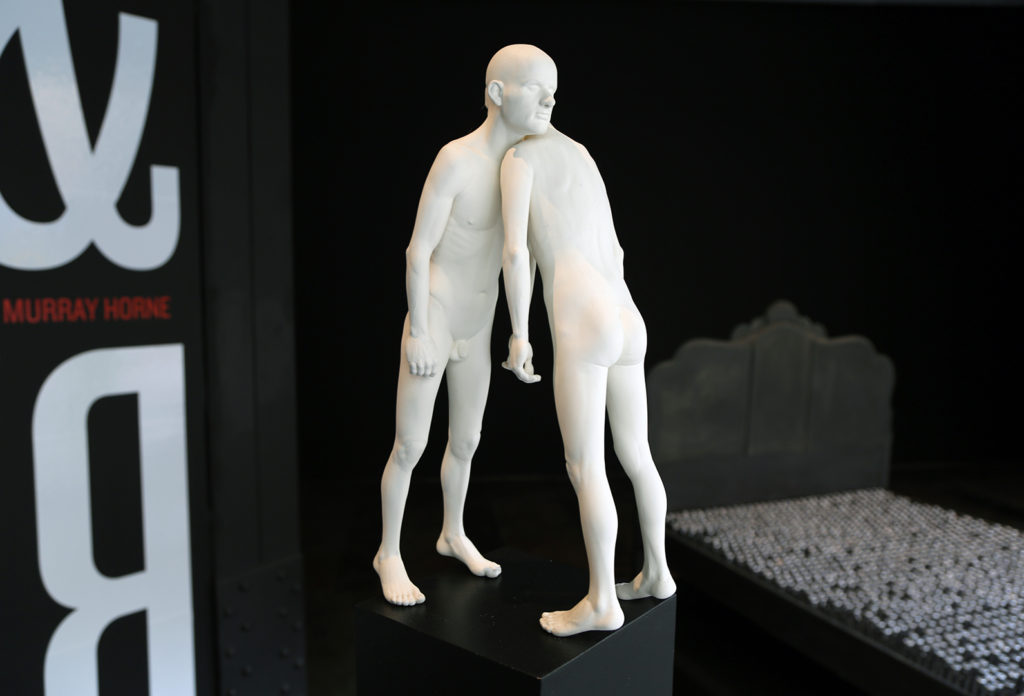 Checks & Balances, the current group show at Space Gallery curated by Murray Horne and presented in conjunction with the International Sculpture Conference, offers a diverse array of sculpture. There are large works: Jill Larson’s bed of nails and chocolates, Jasen Bernthisel’s hanging net of anvils, and what appears to be a hung version of every object in Sarika Goulatia’s studio. There is the mid-size: a light-soaked installation of futuristic apparel and a group of coiling, thick strands of brown clay, both from Brandon Boan; or Shaun Slifer’s presentation of a natural history museum-ready creature. The scale and complexity of all of these pieces command the viewer’s attention. 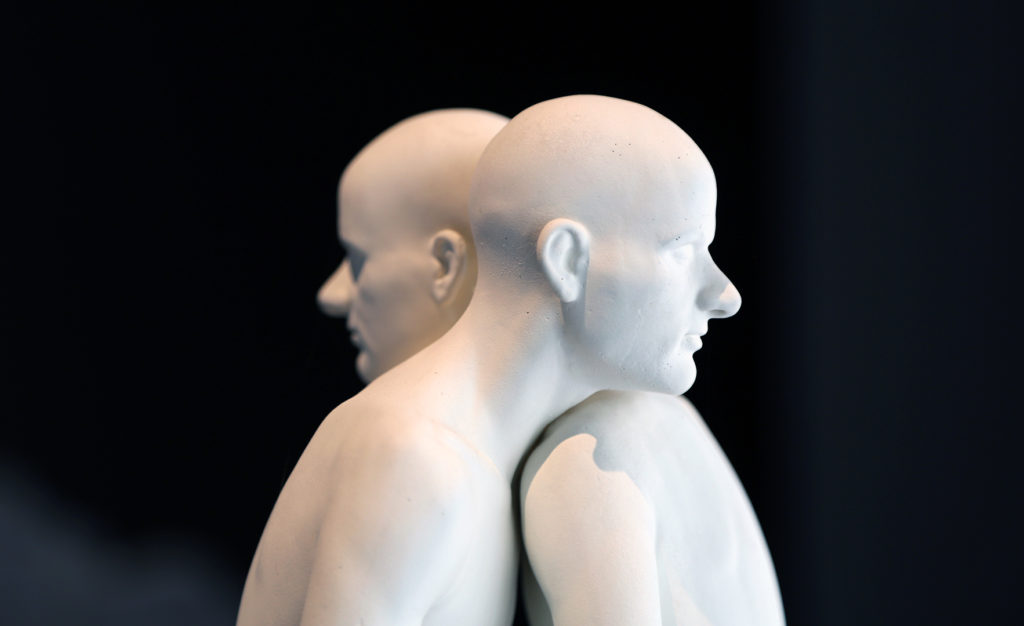 David Bernabo: We are looking at one of Paul Bowden’s sculptures, Two Figures, Front to Front. The figures are made out of gypsum cement. These are actually older works from 2008. Both figures are leaning into each other, using tension to hold themselves up. It’s a very strong pose.

Natalia Gomez: Yeah, they have their legs shoulder-width apart, which is a very strong stance. At the same time, their necks are straight. Their arms are fairly straight. There’s good posture despite both figures leaning in. They are supporting each other, but not collapsing in on each other. Their feet are not totally flat on the ground. All of the weight is on the front of their feet, on the tippy-toes. That creates a nice balance. It’s not a struggle, but it’s a purposeful action.

DB: Both figures have a neutral face, slightly meditative.

NG: And arms and hands are neutral. A neutral spine. Neutral, but present.

DB: The muscle tension is realistic, too. I love the detail of the veins in the calf muscle and the feet.

NG: In terms of the detail, the figures are minimal—these are matte white on black pillars. But the execution of the figures draws you in and brings you back out. So, it’s not completely about the gesture of the figure, but also about the modeling—the detail of the hands, feet, and the rib cage. 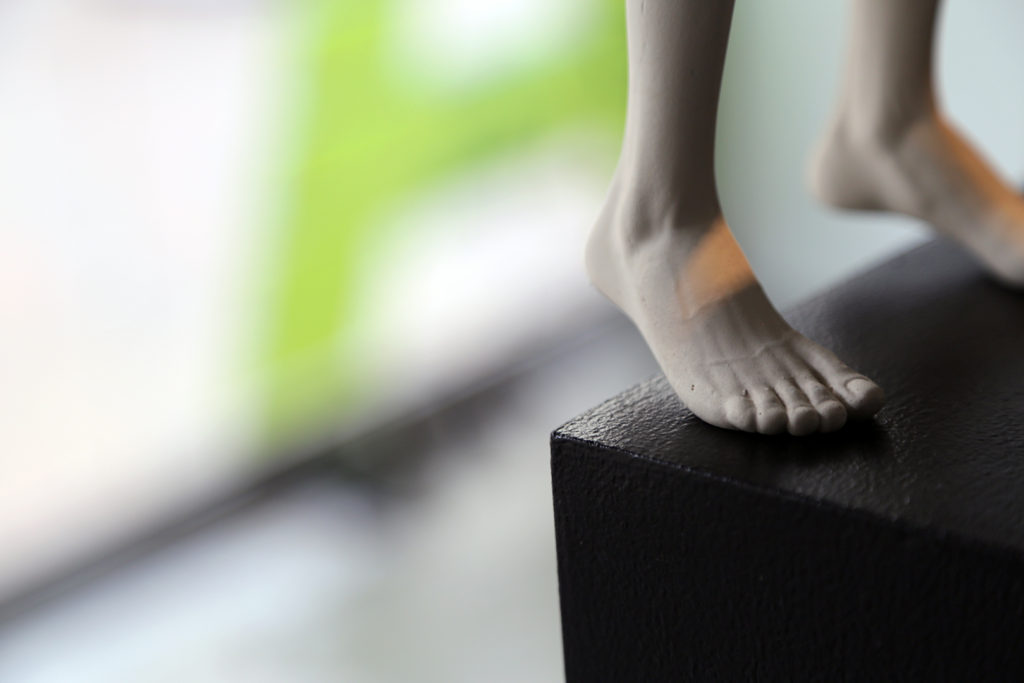 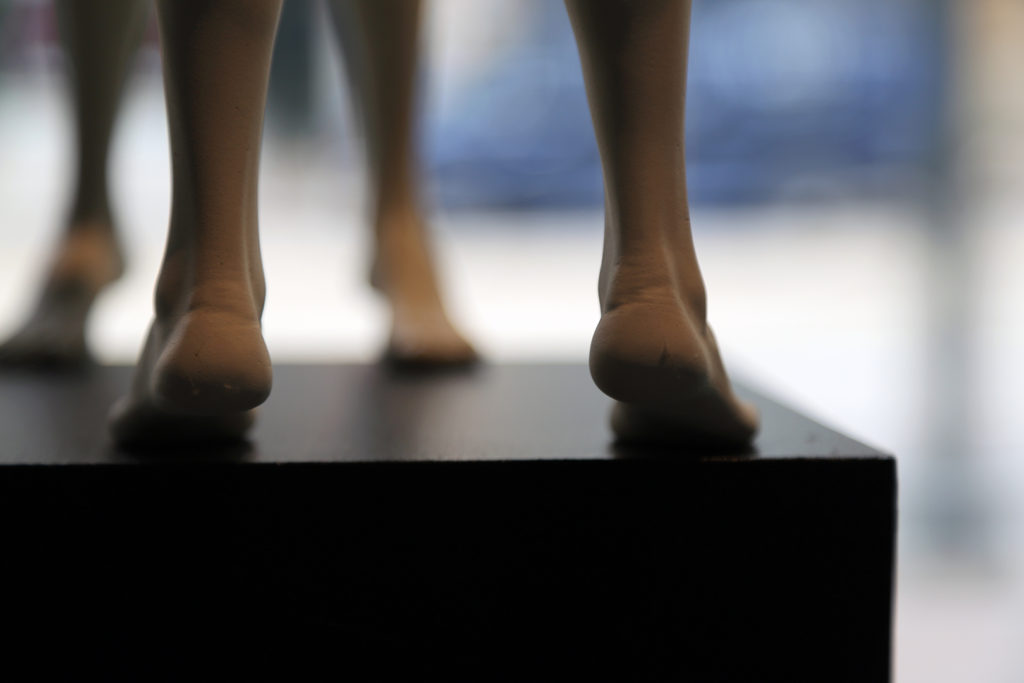 NG: I’m also really intrigued by the height. The figures look to be about 18 inches high, and the pedestals are probably at 60-center [A standard gallery hanging practice in which the center of a painting is hung at a height of 60 inches from the floor]. So, me at my fairly short eye-level, I’m getting butt cheek right in the face, which is really interesting. The figures are above me, but not dominant over the viewer.

NG: Yeah, you need to come down to my level.

DB: Wow, this is much more epic. The figures do look a bit more pedestrian when viewed at eye-level, but, for me, viewing from below figures elevates the scene. The vantage point shift reduces the neutrality of the figures for me.

NG: Oftentimes we are used to looking down at sculpture or being consumed by the scale of it. This work is very much acting as the “respected artwork” where the viewer is not really supposed to be part of its space. And yet it’s sculpture, so it occupies our space. 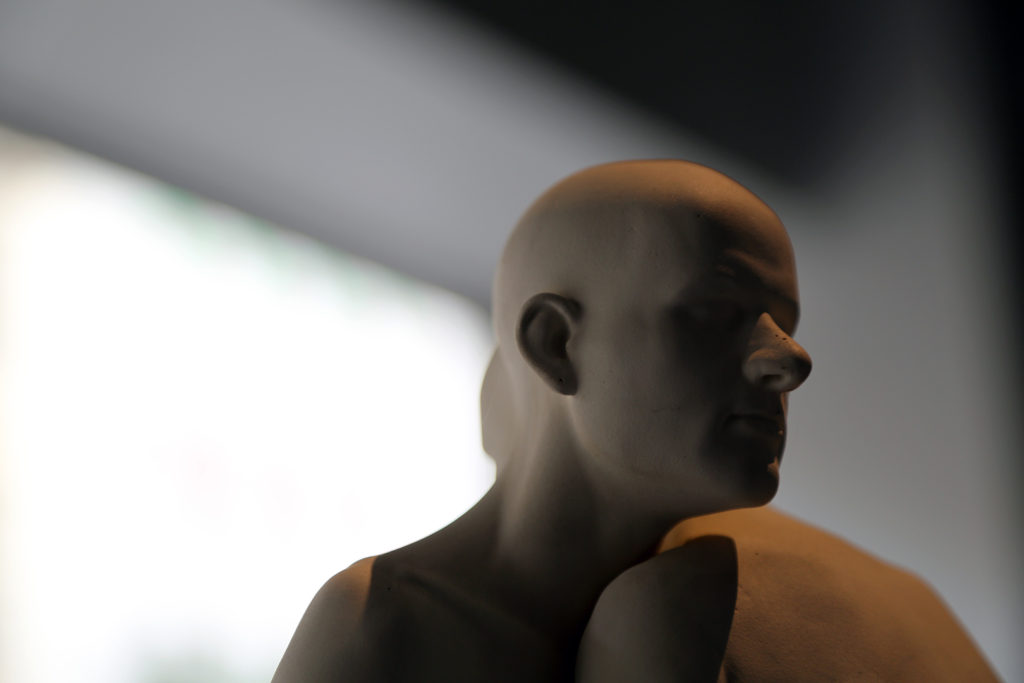 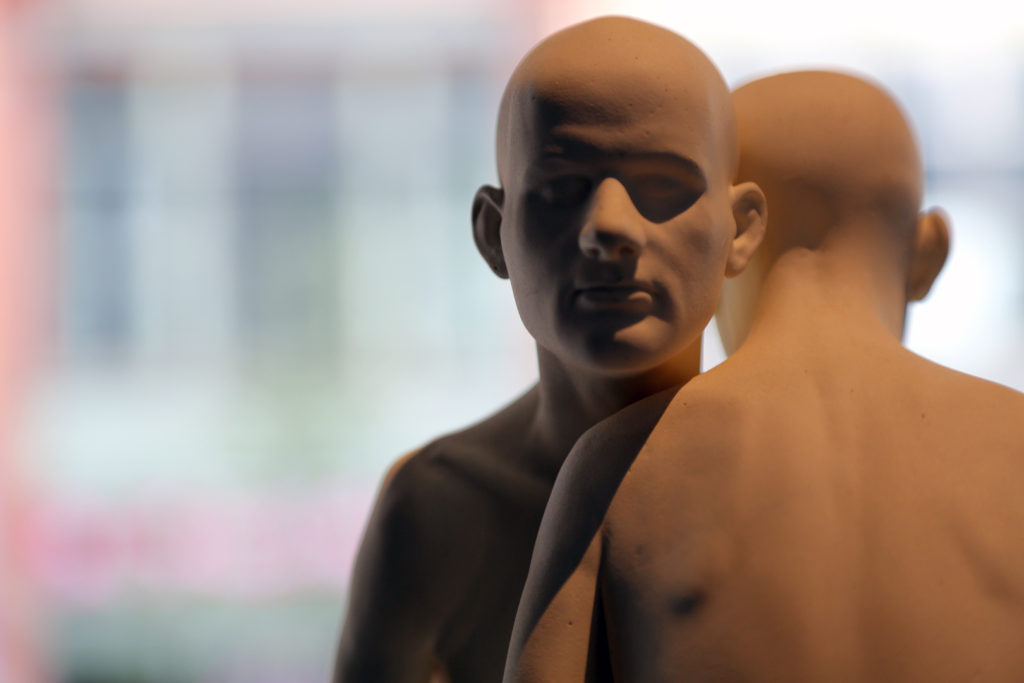 NG: It looks like these guys have been sitting here for so long that there are little cobwebs strung between some of the limbs, like they have been holding each other up for eternity. The cobwebs help drive that home.

The gesture’s stillness is really interesting. And it’s compounded by the fact that the figures are mirror images of each other. There is no intimacy in the gesture.

DB: Yeah, there is no intentionality in their touch. The relationship feels practical.