As part of an editorially independent sponsored partnership with 412 Food Rescue, East End Brewing Company, and Five Points Artisan Bakeshop, we will be exploring bread, beer, and Loaf, a forthcoming collaborative project that’s turning one into the other. Above, our second teaser video. Below, a short history of kvass, a beer made from stale bread, and an inside look into the process of brewing Loaf. 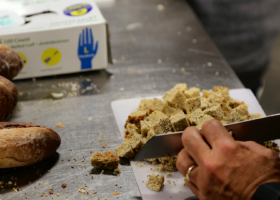 In the cavernous center of the East End Brewing Company building in Larimer, a small cohort of volunteers rips and slices through stale bread, dropping matchbook-sized squares into bags for later use. Sourdough, dark rye, baguettes, and challah run through this human-powered chopper. Seeds, olives, and raisins are removed and set aside as unknown quantities in an already mysterious mash of bread flavors. “Stay tuned for an antipasto beer,” jokes Malcolm Frazer, a home brewer who’s volunteering as a consultant. The bread is from Five Points Artisan Bakeshop in Squirrel Hill, and volunteers with 412 Food Rescue work in daily efforts to rescue, redistribute, and repurpose dumpster-destined food. Today, this newly formed, temporary team is working with the brewers at East End to create a new product: a “bread beer” called Loaf. 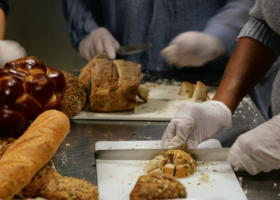 The ancient Egyptians used barley for their brew. Bantu beer, popular in various regions of Africa, relies on malted millet. In Central and South America, fermented maize, traditionally achieved by chewing and spitting out the corn, produces the sour taste of chicha de jora.

For Eastern Europeans, fermented bread was the key ingredient in one of their more popular drinks: kvass. Kvass, generally made today with black or rye bread, is an often sour, low-alcohol beer that has experienced waves of popularity in Russia, Poland, and other Slavic countries. The first written mention of kvass is found in the millennium-old Primary Chronicle text. In it, Vladimir the Great, the grand prince of Kiev, has thrown a party for his conversion to Christianity in 989 AD and his baptismal party menu included “food, honey in barrels, and bread-kvass.”

For generations, though, kvass has been considered a peasant drink. “The idea was that you had bread that you would eat, bread that was getting stale that you would use in soup, and once it was too stale and too dried out, you’d make kvass out of it,” Scott Smith, owner of East End Brewing Co., tells me. In Russian and Polish homes, kvass-making was a daily activity, each batch limited to a lifespan of a few days. More recently, the commercialization of kvass has resulted in a decrease in domestic production, with new markets emerging for kvass as a health drink.

In the States, there are only a few examples of commercially available kvass, and due to its brief lifespan and relative obscurity, most American kvass stays in the realm of the adventurous home brewer. East End Brewing Co. has been experimenting with kvass for a while, generally using rye bread in their special, limited brews. “Our goal with those kvass brews was to make what was in the glass taste like a liquid form of bread,” says Smith. “Over the iterations, we went from fermenting with actual bread yeast to adding caraway seeds in the kettle to give the impression of rye. What we’re doing today for Loaf is a mix of the kvass style and an actual brew day—mixing stale bread and grains.” 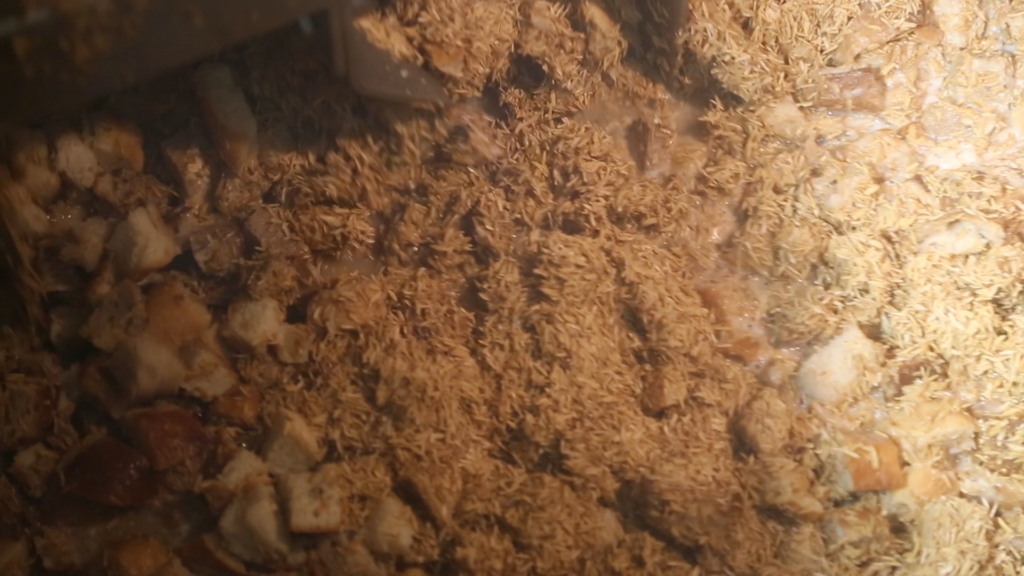 The volunteers made quick work of the 138 pounds of bread and take turns gleefully dumping bags of it into the kettle, allowing the warm flicks flying out of the kettle to fall on their faces. Finished, they descend the ladder alongside the large kettle, and each volunteer is rewarded with a midday East End beer.

The actual process of brewing bread beer is similar to that of a normal brew, but there are key recipe differences that prevent it from turning into a thick porridge. “For the first part of the process, we need to create sugar for the yeast [to ferment] to make alcohol,” says Frazer. “Normally, we get that sugar from grain, but for the bread beer, of course, we are using bread.” Grain is mixed with the sliced bread, and then water and rice hulls are added. The rice hulls are essential for removing sweet wort—the liquid that contains the sugars—from the mash.

“The tricky part is that the bread and malts make the mash stick,” warns Smith. “What we don’t want is a bowl of oatmeal that we can’t get the liquid out of. We want something thinner where we can run that liquid off, because the liquid is going to become the beer.”

Next is the lautering and boiling phase. “Lautering is the process of separating the sweet wort from the mash,” says Frazer. “So, the sweet liquid goes to another kettle and is boiled. The heat helps to sanitize the liquid and extract alpha acids from hops. We are adding nugget and Ahtanum hops. We need to mash it for 90 minutes, which is a little longer than usual, to convert the starches in the bread to sugar. Then, we’ll boil it for an hour.”

“Then we knock it out,” continues Smith, “which is the cooling process where you take it from the boiling vessel to the fermenter. Then, we add our yeast and we’re off the to the races. When we circle back in about two weeks, we should be read to put some beer into a glass.”

Loaf will result in 200 total shares, and a share, priced at $100 each, comes with four growlers. The proceeds from the production and sale of the beer will support 412 Food Rescue’s mission to reduce food waste while offering a short-term solution to feeding those in need in the Pittsburgh area. Learn more about the program—and purchase your shares—here.

As this powerful trio is preparing for the launch of Loaf, The Glassblock is tagging along. In a sponsored, editorially independent partnership with them, we will be producing a short documentary of this unique brewing process. Look for our final segment next week. Cheers!