In his show Waxing & Waiting at 707 Penn Gallery downtown, Brandon Boan presents a series of artifacts (“human synthetics,” he calls them) that seem to be the results of a some kind of science experiment frozen mid-process. These pieces, in a structural flux, exist between solid and gelatinous forms. Masses of goop weave in and out of mesh wire, rainbow rock formations contrast with brown clay spheres, and styrofoam sprouts new appendages. Few clues are given for how these artifacts were formed. For our series The Object, we attempt to focus on one of Boan’s pieces but get purposely distracted by the table on which it rests. Read our conversation below. 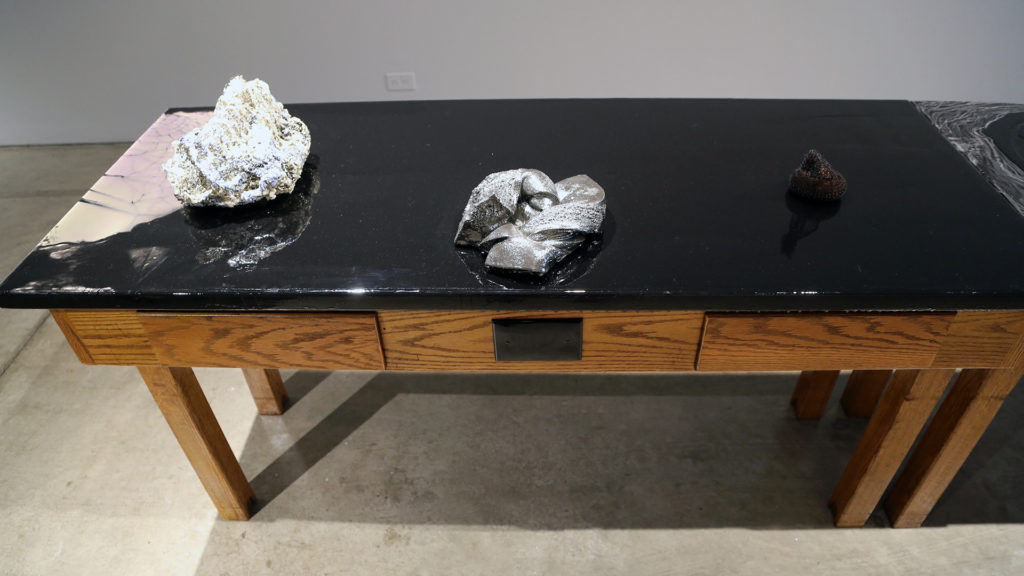 David Bernabo: In the gallery, there are four tables, basically two pairs of two tables pushed together. Each table has three objects on it. It’s hard to discern if multiple objects make up one piece, or if each object should be taken as a separate piece, or if the whole show is one piece. But that seems intentional. The artist, Brandon Boan, did not list individual titles. There’s only a show title and minimal language referring to these objects as “human synthetics.”

Natalia Gomez: Walking into the gallery, it reminds me of the Hillman Hall of Minerals and Gems at the Carnegie Museum of Natural History. You can consider these objects individually, but they cannot be removed from the display and their relationship to each other.

There is so much consideration for every detail in this show. I started immediately picking up on the display. The tables that hold the objects remind me of lab tables, providing an element of science and research. But the surfaces have this beautiful, carved enamel slickness. That subtle application draws you in. You can’t ignore the surface. 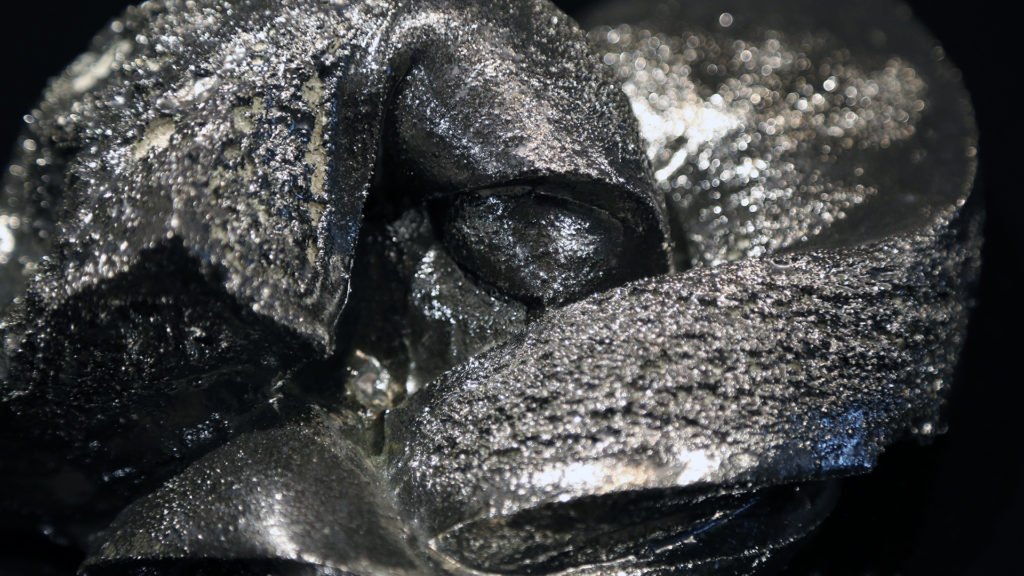 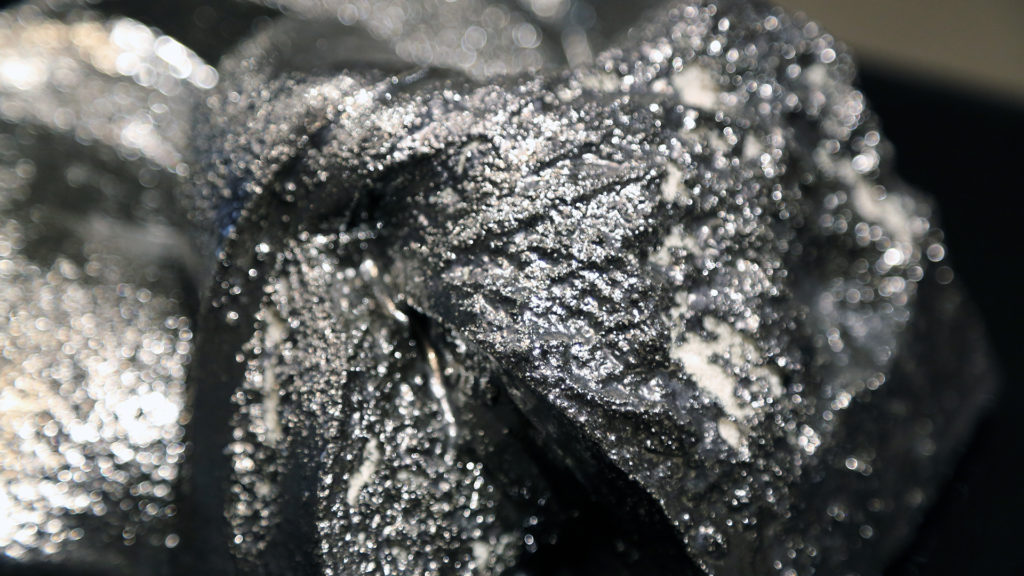 DB: The piece that caught my eye is the sparkliest one. [Laughs] It looks like the material folded out of itself— not violently, but like a continual series of slow changes over time, almost geological.

NG: Yeah, it’s like a video of a volcano and… what do you call it?

NG: Yes, lava! The material looks to be actively solidifying and exploding from within itself. It is turning in and over. In that way, it has that lava quality, but covered in silver spray paint or some silver coating. It seems really solid. 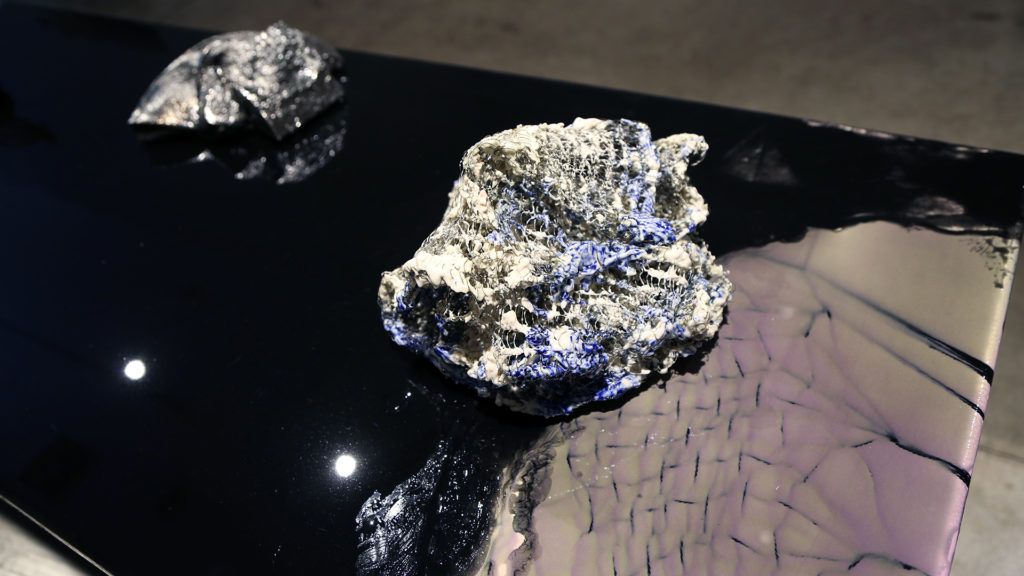 DB: Looking at the objects on this table, this is the most compelling set. There is decently drastic difference in material and color.

NG: When you are looking at this set of three objects versus the other three sets, there is difference in sheen, scale, the manipulation of material…

DB: Placement on the table…

NG: Right, nothing is totally linear, so everything has a nice composition to it, especially with the purple color injected into the table surface. And the shiny is so seductive. If you get really close, you can see a rippling on the table. It’s water-like. 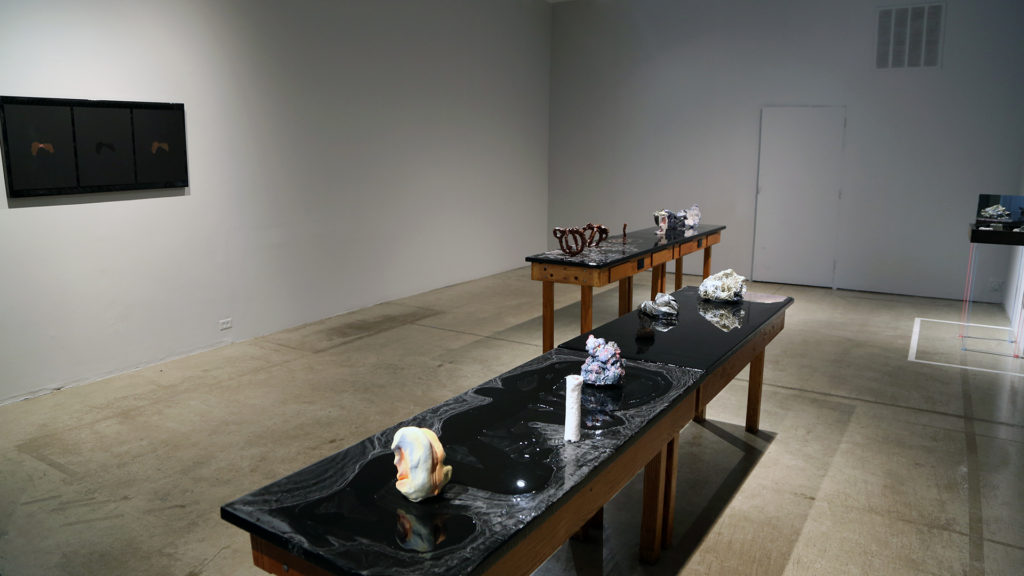 DB: I love the mystery of these objects. It takes time to unpack what is going on.

NG: And with that ambiguity, you do want to unpack the whole show from each corner.

DB: Yeah, it seems like Boan’s show broke our review model. It’s impossible to talk about just one object.

NG: I keep going back to the table surface and then to the tables themselves and their history. We have these “human synthetics” that have been manipulated and exposed, and their origins removed. Then, they are sitting on these oak tables, created from this natural resource that we’ve exploited and planed and sanded and manipulated to act as supports for the objects. Looking at the two [the synthetic objects and the table], the oak is no more “real” than any of the materials on the table, because they’ve all be removed from that origin.