The Lampshades broke up in 2009 after a tense show at the Brillobox, a year after releasing their celebrated third album Are Alright. “We were pretty young,” guitarist and lead vocalist Jaren Love admits, and the trio—an indie rock/garage pop outfit rounded out by bassist Chris Kibler and drummer Dane Adelman—splintered to pursue other projects. But The Lampshades had the benefit of a long shared history on their side: Growing up in rural Bedford County and Altoona, Love and Kibler fused their punk rock and retro power pop sensibilities (“something between the Beach Boys and Black Flag,” Love summed up), and as teens in the early aughts they began recording and performing across Pennsylvania in earnest, soon bringing on Adelman to replace an even younger former drummer. In 2012, The Lampshades reunited, and today they live and work in Pittsburgh.

While they’re still polishing their fifth full-length album Astrology, today The Glassblock is premiering a single, “Joanie,” and a B-side, “Table,” both of which are streaming below. I caught up with The Lampshades over a fuzzy Google video chat—our lightly edited conversation is included here—but just before diving into the details of the “dramatic shift” that is their forthcoming album, we started back at the beginning.

Adam Shuck: What were you all listening to around age 16?

Jaren Love: Around that time I’d read the book Our Band Could Be Your Life by Michael Azerrad, and that was really influential for me. It chronicles thirteen different bands from the ‘80s, and the thesis of the book is that they’re the bands that led up to the breakout of Nirvana’s Nevermind, like Dinosaur Jr., Sonic Youth, Mission of Burma, Black Flag, Hüsker Dü, The Replacements… That book opened up the floodgates for me. I was also listening to a lot of Big Star, and I think, through Chris, I was going through my proper Beatles phase.

Dane Adelman: I was probably listening to Syd Barrett and Beach Boys’s Smile, and also Tchaikovksy and Stravinsky and stuff. And Sebadoh. And I was discovering ‘60s psychedelia and weird hardcore and post-hardcore.

Chris Kibler: I was probably listening to stuff like Wire and Gang of Four. The Beatles and The Beach Boys a lot. And jazz—trying to listen to Miles Davis or John Coltrane before I went to bed. I think at that time, at that age, I would actively seek out music to listen to, and… I kind of don’t do that anymore. 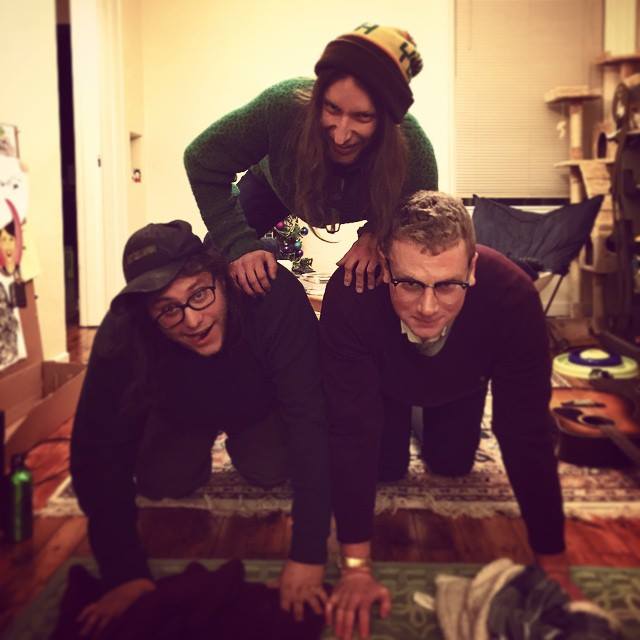 AS: This summer you opened for Beverly at Club Cafe and have played a few shows in addition. But you’ve also been working on your new album?

JL: We started seriously working on the new album in 2014. We wrote a lot of the songs together, and then I wrote some of the songs on my own. We’ve been spending a lot of time recording it and taking a way different approach than ever, coming up with stuff on the fly together and improvising a lot.

DA: There are two particularly interesting songs that came out of us just hanging out. I remember one night we were watching this documentary about Harry Nilsson. It was pretty depressing but also inspiring. After it ended I sat down at Jaren’s Wurlitzer and insisted that we write a new song, and we ended up with something that was pretty different from most of our other material, with a Pet Sounds-ish chorus. [Another time,] this one Sunday where we were day-drinking—I think Jaren was a little ahead of me (a lot of this record came out of writing while inebriated or on hungover afternoons)—we wrote this completely acoustic song. The whole song is harmonized together, and we’d never written like that before.

Everything before this has been Jaren bringing it in, and I’d maybe add something or Chris would add something. But this was the first time where there are songs whose complete genesis was the collaboration between Jaren and me.

AS: How does this new album you’re working on compare to [2014’s] Numbskull Nothinghead?

JL: Numbskull Nothinghead was meant to be a rock record. It was around the time when every band we would play with was trying to sound like My Bloody Valentine. And so we were kind of influenced by that… but just wanted to do it better. So we tried to get this really big rock sound. Then when we broke up, we picked up the pieces of that and then tried to make just a straight rock record, with a little bit of the Easter eggs and trumpets and stuff like that—

CK: [In] the recording of Numbskull, the guitars sound bright, but there’s some distortion too. But this [new] record sounds way more lush.

DA: Before, I’ve always been perfectionist with our stuff. Around a year and a half ago, I was having a weird time and coincidentally was also getting really into Big Star’s Third and late-’70s Alex Chilton, which is just kind of a total fucking mess. I wanted us to have these really well-crafted songs that sounded like we just didn’t give a fuck when we were recording them. So there’s this weird balance where our songs are more sophisticated than before, but they’re also recorded in this, not just raw, but messy way. Like, ah, that take might not have been perfect, but it feels the best.

CK: There are lots of weird little sounds and stuff, like just us talking, and we’d just leave it in.

DA: At our practice space [in Etna], there’s this lock that’s meant to keep the door shut. One night this guy came over and helped us fix it, and we recorded his drill—it just happened to be playing back in one part of the song that we’re working on, so we’re going to leave it in there.

AS: Tell me a bit about your single “Joanie” and its B-side “Table.”

DA: It’s probably the most bizarre thing we’ve put out. The A-side, “Joanie”—Chris and I were just driving to our practice space intending to work on our record and then, in the car, Chris was singing an Everly Brothers song, and I was just like, ah man, we should write a song that feels like this. So we went to the practice space and wrote this song. I played a crappy drum take, and we ended up recording this whole song, not intending it to have anything to do with The Lampshades. And when we played it for Jaren, he liked it so much that he recorded the lead vocals, and now it’s a Lampshades song.

JL: In my first apartment in Pittsburgh—I lived on Edmond Street [in Bloomfield]—and we had a basement where [Dane and I in a previous band Sports Metaphors] would practice, so I had a full drum kit and everything there. I would sometimes go down and make four-track recordings. I made “Table” one day, playing everything on it—the drums, the bass, the piano and the guitar—and [Chris and Dane] liked this demo version so much that they were like, well, why don’t we just keep this. I had a local guy, Jay Vega, master it, and he did an incredible job, because all I had was a four-track MP3, really low quality, and he was able to make it sound really good.

So what’s interesting is that [“Joanie”] is a song that they had written without me and then [“Table”] is one [with which] I had nothing to do with them—and now we’re putting it out, almost like a White Album-kind of idea—[but] I’m making it very clear I’m not comparing us to The Beatles.

AS: Do you feel that the difference between this forthcoming album and your previous work is more of a break, a totally different thing in a way?

DA: In some ways, this record is a particularly dramatic shift, but we’ve always tried to have each record be a reaction to the last one. That way you know you’re not making the same record twice in a row—we don’t want to do that.

JL: Absolutely. It’s this thing where… When you’re a kid, you’re super protective of everything, and [in the past] I kind of wanted it to be, I have to admit, like, I wrote every song on this, and this is my band. But [now] it’s almost like an aging thing, like—

CK: You can’t control it completely, you have to let it just be what it is.

JL: It’s like the imperfections of life reflected on the work. Like, why should I have to be the one credited with writing every song? Dane and I should write together; Dane’s extremely talented. I used to be reluctant [before] because I wanted to have that “I wrote everything on here” but now it’s like, I don’t care and I just let it happen and then something completely more beautiful came out of it. At the end of the day, nobody gives a shit who wrote it as long as it’s good. It’s like, just do what you do, and it’ll all be fine.

The Lampshades are still finalizing Astrology—and it’s not expected to be completed until sometime in 2017. Mixing and mastering and determining “the right circumstances” for its eventual release is serious work, but, like the kind of dizzy childhood anticipation that comes with waiting for Christmas morning, as Love described, they’re holding onto the fun of it.