It began as an experiment. “I wanted to see what would happen if a large number of different artists—well known and little known—each painted the same subject,” designer Brett Yasko said. That subject was John Riegert, a Pittsburgh artist and Yasko’s longtime friend. Over the course of two years, Yasko organized portrait sessions of Riegert with 110 local artists; many others worked from a photograph of him in a bright red sweater.

Now, all 252 portraits are on view at SPACE in what the gallery’s press materials claim is “one of the largest group exhibitions to be displayed downtown in Pittsburgh’s history.” In addition, Yasko has included some works by Riegert himself:  His drawings wallpaper the gallery’s storefront, and videos of his early performances play on a small monitor, a nice complement to the uncanny suite of portraits, which, when taken together, suggest a cult of celebrity in the making.

But who is John Riegert? In the weeks before the exhibition’s opening, speculation abounded—he was a big-time artist in the ‘70s who had since faded from memory, some speculated, or, perhaps, he had already passed away. As I began talking to participating artists about their work on this project, it seemed like everyone knew John, but none could tell me much about him. As it turns out, the question of his identity is part of what makes Yasko’s project so interesting—but instead of answering, it prompts other lines of inquiry that go beyond the individual man and touch on community, identity, and the nature of portraiture itself. 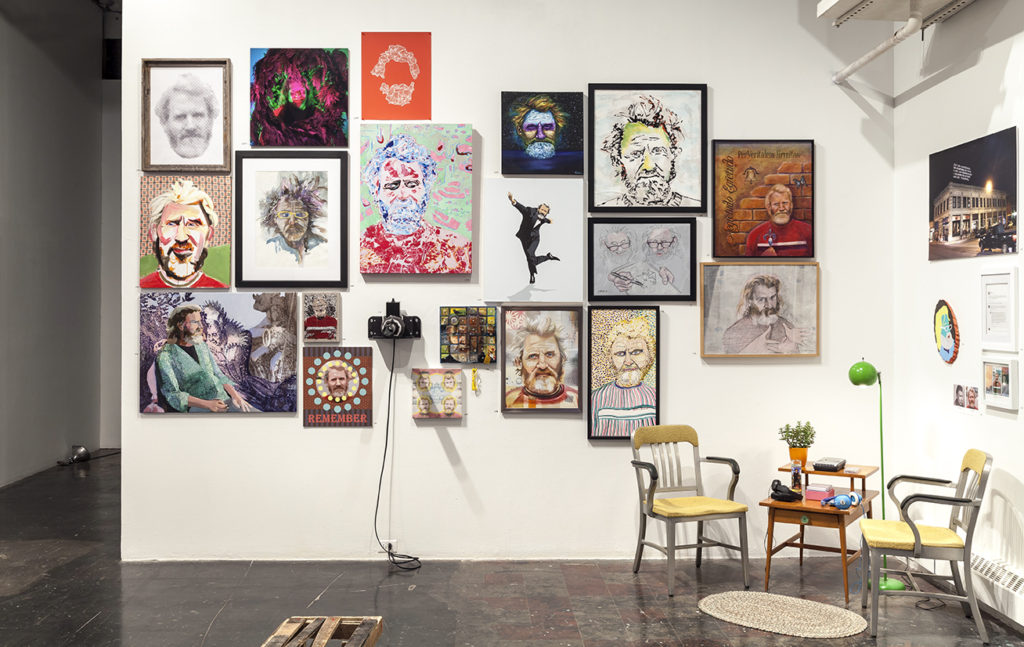 Like a nineteenth-century salon or a contemporary flea market, the vast downtown gallery is packed, works hung low and high on the walls, from the ceiling, spread across floors, and tucked into corners. They represent an astonishing variety of artistic approaches. Some paintings are tightly rendered; others are loose and impressionistic. Some picture Riegert as serious, while in others, he cracks a smile. In a touching trio of Polaroids, contributing artist Elizabeth Raymer Griffin dons the red sweater, making a portrait of herself as Riegert. Her body becomes fainter in each frame, almost disappearing entirely. Photographer Matthew Conboy slyly captures Riegert as he holds up a smartphone in front of his face, concealing his features from our view. Inevitably, at least one artist asked him to pose nude.

Several portraits stand out for their unusually innovative conception, particularly an interactive 3-D rendering of Riegert’s body by Caroline Record and Ricardo Iamuuri Robinson. Hovering cross-legged amid a blank white field, Riegert appears calm, a Buddha-like figure basking in enlightenment. Using a mouse, gallery visitors can trace the surface of his body, an experience which feels surprisingly tangible despite the crisp digital environment. Each video journey is accompanied by a soundtrack of Riegert speaking and making expressive sounds. “You do heal and come out fine,” he says in one recording. “You can do it. It’s possible. I’ve tried to be good my whole life. Sometimes I haven’t been. It’s ok.”

In this and other works, Riegert comes through as sincere, vulnerable but dignified, an equal and active participant in the project. After touring the entire gallery, I felt I had experienced him on his good days and bad, alone and among company, at home and about. Yet, curiously, this experience did not produce a clearer, more comprehensive sense of the subject—quite the opposite. Somehow, despite the variety of works, John Riegert does not take us deeper into the subject but rather obscures him from view. 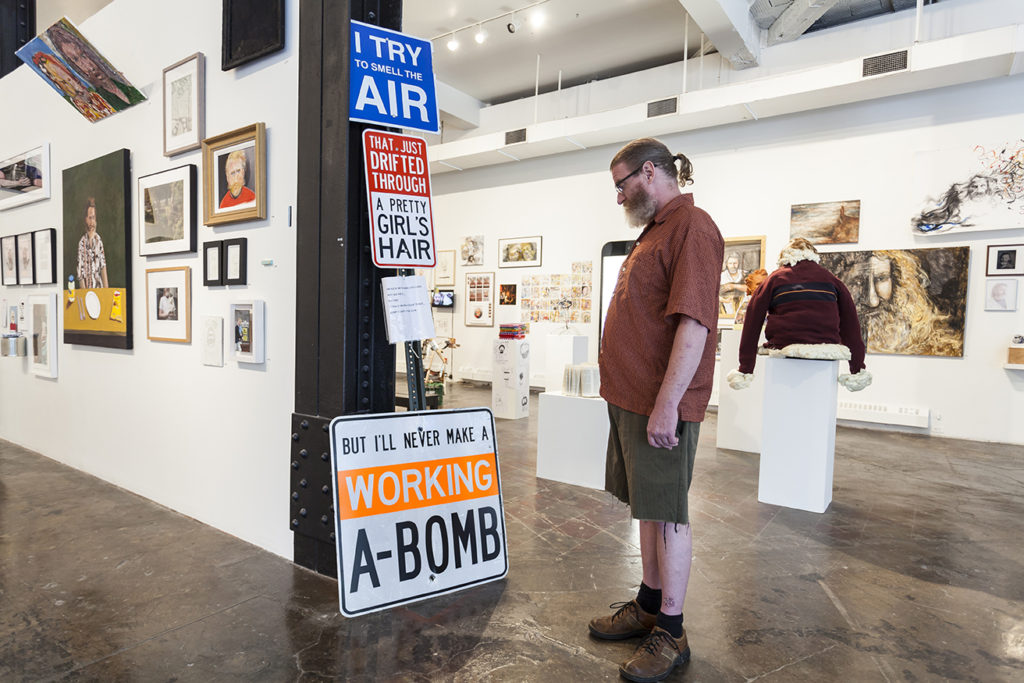 It may seem counterintuitive, if not perverse, to claim that a show titled John Riegert, featuring nothing but portraits of John Riegert, isn’t really about him after all. But it’s a direct consequence of the show’s presentation, placing as it does remarkably different representations of the same subject side by side for our review. After studying a few portraits we become acquainted with Riegert’s most distinctive features, notably his bushy, reddish hair and beard and blue eyes. But soon the shared subject falls to the margins of our attention, leaving the artist’s choices front and center. For instance, when I came across a punchy black and white photo of Riegert taken in a studio under a broad, soft light, I didn’t notice his character, but instead the way the photographer had transformed him into a polished but typical studio portrait that wouldn’t feel out of place in Vanity Fair.

Moreover, the exhibition does little to fill us in on biographical essentials. It’s not obvious from the selection itself that Riegert is Yasko’s friend and a fellow artist, that he is now 48 years old, that he attended art school at CMU in the 1980s, that he lived in Lawrenceville for much of his life, that he was twice married and divorced and has a daughter, or that he has periodically been hindered by mental illness (he suffers from Bipolar II). But then again, on some level, the details don’t matter.

The artists’ general indifference to biography was sharply reinforced by the inclusion of several completely abstract works by Seth Clark, Dee Briggs, Michael Lotenero, among others. Since portraiture by definition requires figuration, or at least some relation of resemblance, abstract art cannot be a portrait in the usual sense; if Briggs insists that this hanging steel I-beam encrusted in concrete is a “portrait” of John Riegert, we must take her word for it. 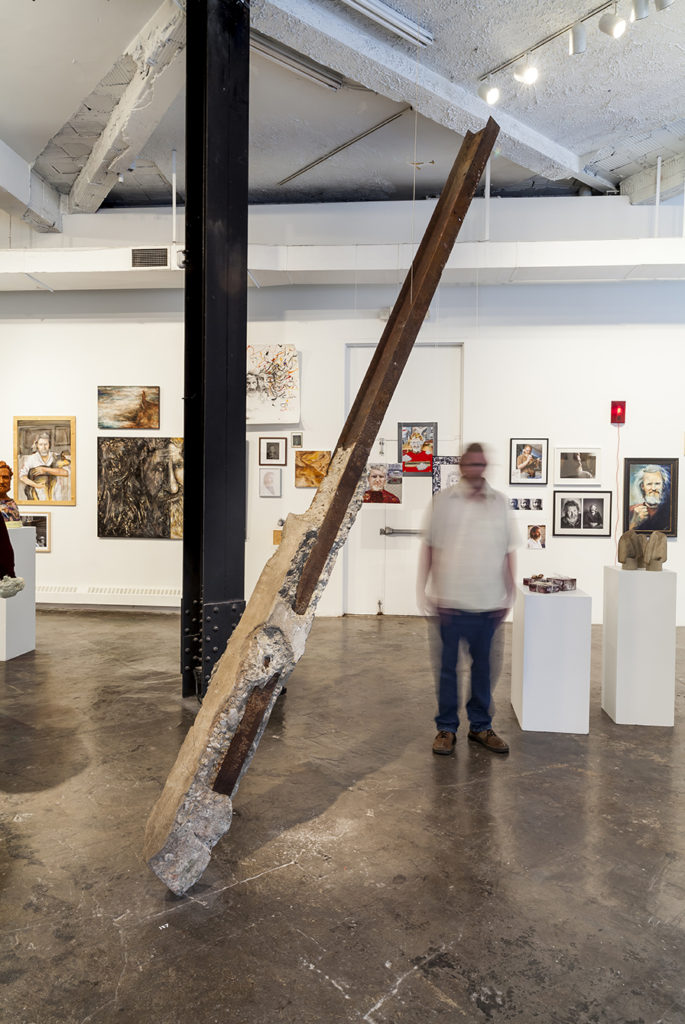 This isn’t to argue that Briggs’s I-beam is not a portrait of John Riegert but rather that the question of whether or not it is one is a source of tension in the work, and one that pervades the show generally. Some may find this familiar, citing Robert Rauschenberg’s famous and unconventional Portrait of Iris Clert (1961). When invited to participate in a group show of portraits of the Parisian gallerist, Rauschenberg instead sent a telegram which simply read, “This is a portrait of Iris Clert if I say so.” In this gesture Rauschenberg followed the earlier example of Marcel Duchamp, who shifted the source of artistic value away from the formal features of the work and onto his own authority as an artist. We have Duchamp to thank (or blame) that art today need not look a certain way. It just has to be accepted as art.

Personally, I’m less interested in whether abstract qualifies as portraiture than I am in why such an accumulation of portraits tell us so little about the sitter. If this show is not about John Riegert, what is it about? In the press release, Dan Byers, senior curator at Boston’s Institute of Contemporary Art, suggests it is “a portrait of Pittsburgh, its artists and what it means to be a creative individual within a small community.” Fair enough. But what does that mean?

This question isn’t easy to answer. We might observe, as Riegert himself has in interviews, that Pittsburgh artists are a really warm and welcoming bunch. We might also draw attention to the very smallness of the “small community,” noting the vanishing presence of artists of color in the show; though probably less a conscious choice and more a symptom of the ways our representational practices depend upon curators’ organic social networks, it doesn’t make it less problematic. We could also discuss how much the community is growing, both luring newcomers from cities like New York and San Francisco and retaining younger artists after graduation, a change from Riegert’s own time, when most of his peers sought better career opportunities elsewhere. Or we could talk about the range of people who fall under the umbrella of “artist”—from prominent, credentialed professionals to those on the margins of our cultural institutions, whether by choice or force, making their living by other means.

In any case, if Dan Byers is right that John Riegert is a portrait of the Pittsburgh art community, I hope it will be read not only as a celebration, much less as flattery, but mainly as a provocation. The exhibition raises lots of questions that, though maybe impossible to answer, are very much worth thinking about—and which make John Riegert well worth the visit.