I have always been afraid of snakes and lizards. Despite being raised in Wisconsin, which has a dearth of scaled animals, I spent much of my childhood checking under my sheets for venomous reptiles, and I admit that I still have to turn on all the lights in the house after a nightmare about snakes. So naturally, when I learned of the existence of the Steel City Reptile Expo from a small sign posted on the side of I-79, my first reaction was to plan a trip to the IceoPlex in Canonsburg so that I could spend a Saturday afternoon in a room full of them.

Reptiles are among the most foreign living creatures I can imagine. Malign representation in the media aside (see: Kaa of The Jungle Book or the titular anaconda of Anaconda), I just don’t have much in common with them. Cats, dogs, and even rodents make sense to me as companions, because we at least can share a sense of mammalian solidarity. And while I don’t exactly enjoy fish, I can at least trust them to stay in their own aquatic space, functioning more like wet art objects than pets. The allure of reptiles, on the other hand, completely baffles me. They love hot weather and eat infrequently (devouring their food live when they do)—lifestyle choices that I actively avoid.

Regardless of my own prejudices, many people love these creatures: over 5.6 million households own a reptile in the U.S., and reptile ownership has outpaced dog ownership in the U.K. According to the event’s founder and organizer Tom Kelly, the Steel City Reptile Expo opens its doors for six events a year, welcoming around 1,500 attendees and dozens of vendors and educators each time. What drives so many people to seek out these cold-blooded animals? What makes so many people not only tolerate, but actually love these creatures? 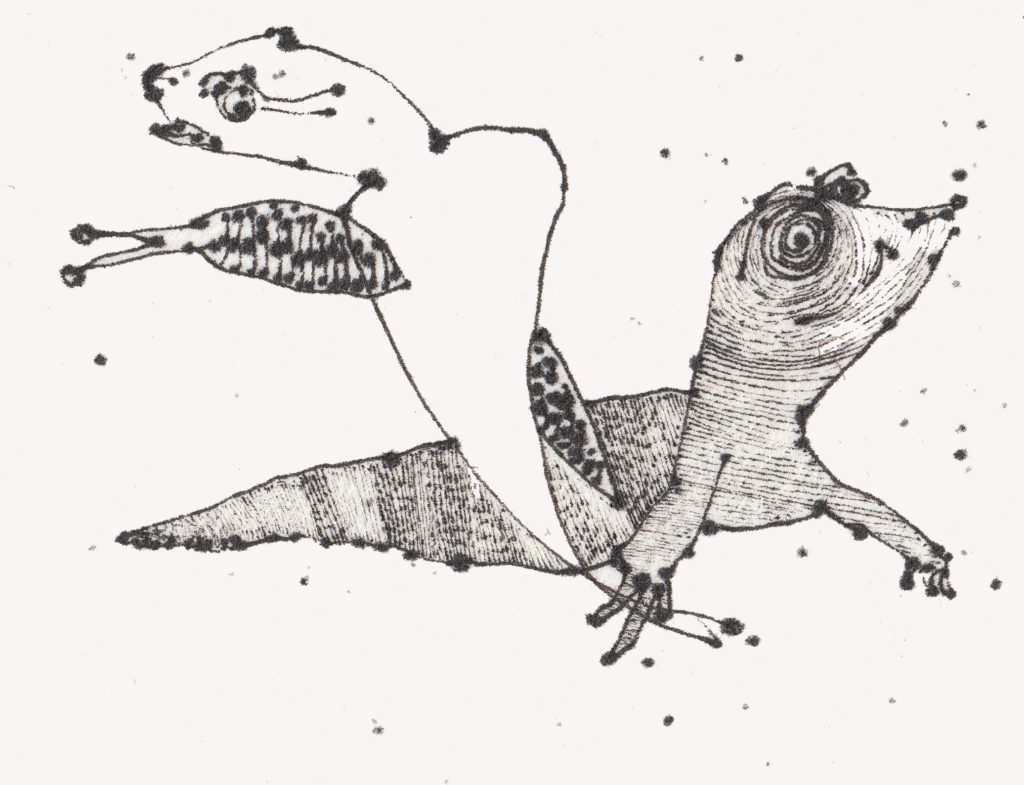 After passing an ice hockey practice on the IceoPlex’s indoor rink and paying a modest entry fee, I ventured into the Expo itself with illustrator Dan Ivec, my indulgent friend Clint, and his six year-old daughter Ellison. Much like any other special-interest convention, there were dozens of gray folding tables stacked high with merchandise. Business owners and their teenage associates stood behind the tables, engaging customers with varying levels of interest.I had assumed that the reptiles would be in cages, or tanks, or something sturdier than #5 plastic, but a closer look revealed tablescapes of hinged plastic to-go boxes stuffed with snakes. Ranging from small albino corn snakes to medium-sized young ball pythons, the creatures writhed in their boxes, knotting and unknotting themselves against the lids. My first, pressing impulse was to run upstairs, perhaps even onto the ice skating rink if necessary, just to get away from this room of wriggling reptiles. Meanwhile, around me, lighthearted and eager, children and their parents meandered among the displays, tugging at cheerful balloon animals.

I took a deep breath and walked towards the closest booth, where a vendor and his customer were discussing heat lamps, as dozens of snakes, some stacked two-deep, squirmed between them. Sweating, I forced myself in for a closer look, and I was struck by how colorful these animals were. From the bright orange and yellow stripes of the milk snakes, to the brilliant dappled greens on the young chameleons, the reptiles displayed a huge array of patterns. The snakes’ movements soon became hypnotic, and almost soothing. I was glad that they were locked safely in their boxes.

The first cold-blooded attendee I met was Leah, a 9-year-old male bearded dragon hanging out with his owner Melissa, who had brought him to the Expo in order to model tiny blankets and capes crafted by Kathy of Ubby’s n’ Stuff. Her colorful, hand-sewn gifts resembled baby blankets, except they were embroidered with slogans like “Reptile Lover” and “Beardie Mom.” Despite my earlier disquietude, Leah actually looked adorable and hilarious in a fleece cape.

Melissa gushed over Leah and told us that he was her constant companion: Leah kept her and her fiancé company on road trips; Leah occasionally slept between them in bed at night. Expertly, Melissa lifted him up and placed him on her shoulder, where he clutched onto her shirt like some kind of stoic, oversized brooch. Animated, and with real affection, Melissa spoke of how “friendly” and “chill” Leah was, descriptors that I would hear over and over throughout the day from the other reptile enthusiasts—“Us crazies,” Melissa as put it. 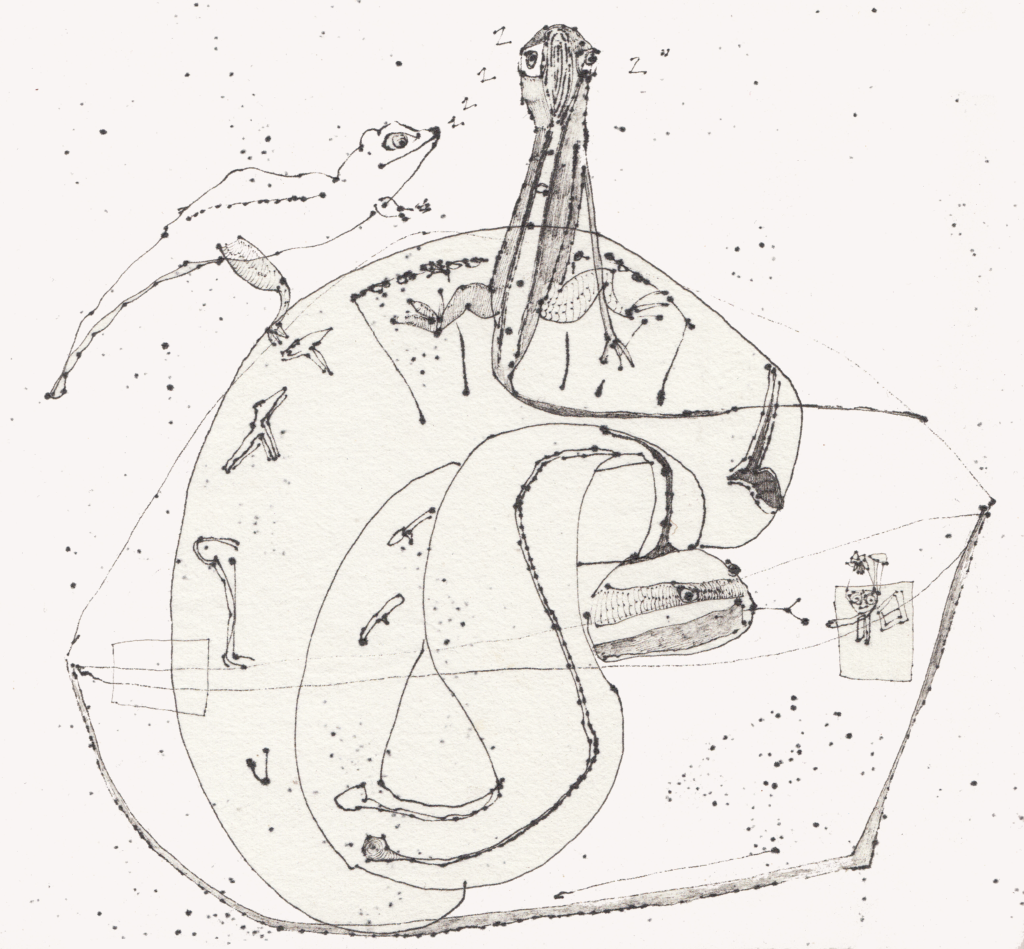 Part of the allure of reptiles seemed to be the fact that they are strange to many people. Kathy, the lizard cape vendor, assured us her handmade snake-toting bags were “definitely a conversation starter.” A young woman walked through the Expo with a baby alligator on her shoulder, laughing as she was stopped again and again to have her picture taken. Others—dozens of people—chatted, shopped, and ate hot dogs with bearded dragons casually lounging on their shoulders and necklines. Surveying the crowd, bubbling with excitement to buy, sell, learn, and talk everything reptile, I began to think that I, lacking a lizard-as-accessory, was in fact the strange one in the room.

Joyous and technicolor, a sense of fun and excitement permeated the Steel City Reptile Expo, and though I can completely appreciate that, I turned down Melissa’s offer to hold Leah. I came away from the IceoPlex that day not having touched a single animal (though Ellison, who was braver than me, fed a cockroach to a bearded dragon). Reptiles—like horror movies, orgies, or cilantro—aren’t for everyone. But the atmosphere that day was jubilant, a homecoming for herpetophiles and their cold-blooded companions. While I probably won’t go back any time soon, I’m glad this colorful community has their place in the sun.