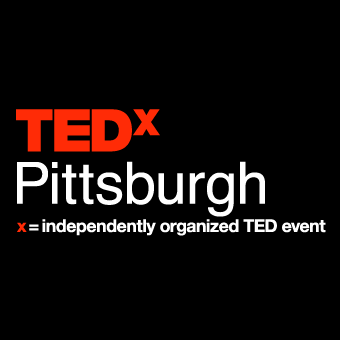 On May 22, I attended my first TEDx Talk. What follows is an account of the day’s events.

I cover ginger granola with Seven Stars Farm yogurt. The granola was bought in bulk, reducing my food costs, and the yogurt was created using biodynamic methods, which put more life into the soil than they take out. I assume these food choices will allow for better concentration during today’s talks.

I also add raspberries, but my past self did not think to add a paper towel to the carton, resulting in a good deal of mold. I rescue a few edible candidates and contemplate if the raspberry’s instinctive cell structure prefers to be eaten or to decompose in the trash. Maybe a TED Talk will address this.

To increase my brain power, I listen to the intricate choral and string cycles in Heinz Holliger’s Machaut-Transkriptionen.

This year’s TEDx is housed in the beautiful Soldiers and Sailors Memorial Hall. Eleven years ago, I was one of about 80 students who found themselves dwarfed by the main hall’s incredibly high ceilings and inspiring (and threatening) eagle statues during a graduation ceremony. That day, I bailed on my college friends, trying to cope with an intense migraine, and went to a celebratory dinner at LeMont with my family.

Today it is 57 degrees outside and threatening to storm. Paper coffee cups in hand, hundreds of eager attendees are milling about outside the building’s locked door. A man shouts into the crowd, “Are you ready to get learn-drunk?” 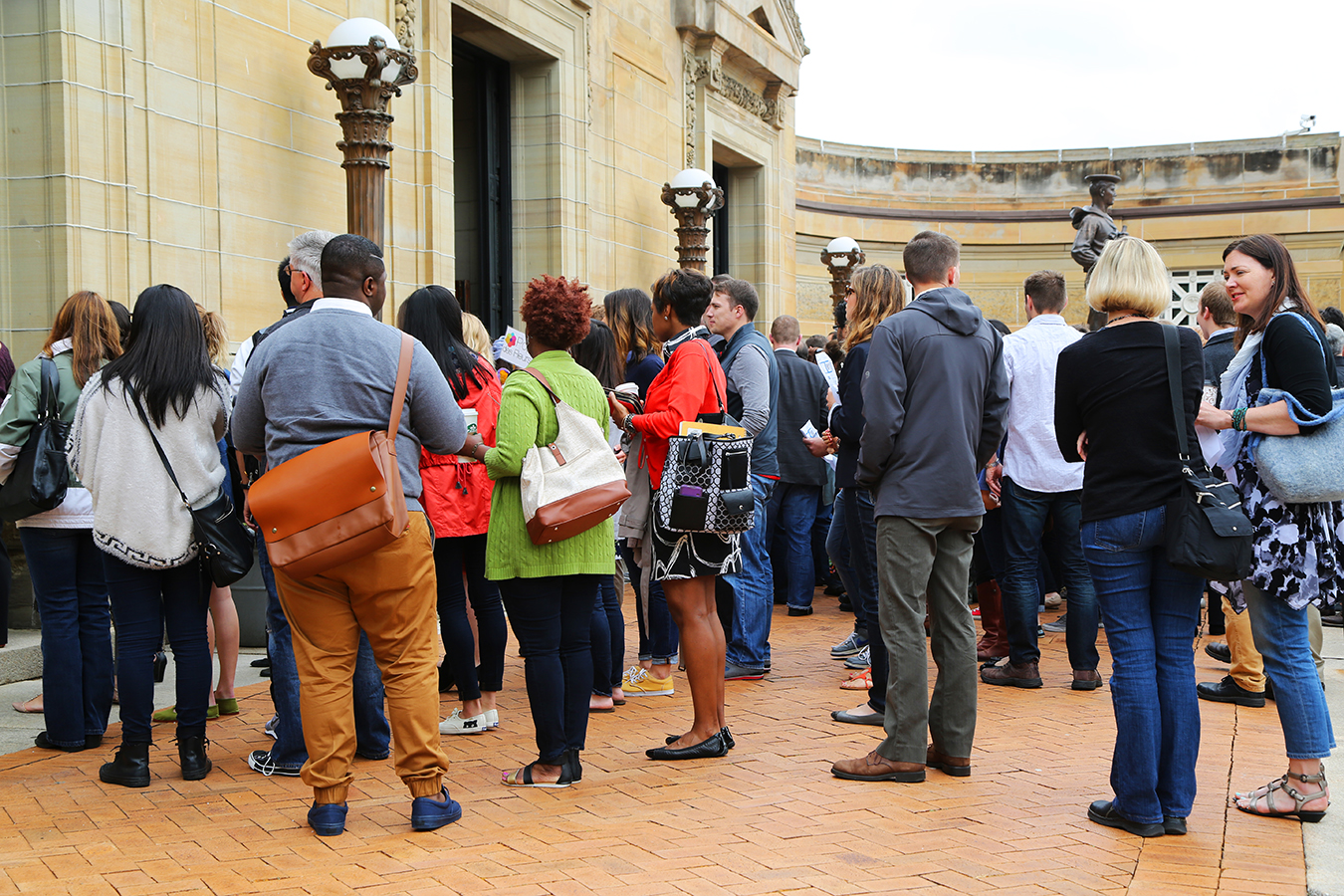 A few minutes after 11, the doors open and the crowd files in, registers, affixes name tags. The TEDx volunteer crew runs a tight ship.

I camp out in the front row, chatting with filmmaker Mario Ashkar about our current artistic pursuits. Soon, a very slick video shows a sequence of beautiful, slow-motion shots alluding to acts of activism. Mario and I comment on the slickness with a tinge of both jealousy and dismissal, as our own video pursuits can take on a shakier aesthetic.

Emcee Katie O’Malley enters the stage and explains how this year’s TEDxPittsburgh theme is “Activate: Ideas in Motion.” The event will consist of three blocks of speakers with lunch and coffee served during the breaks. 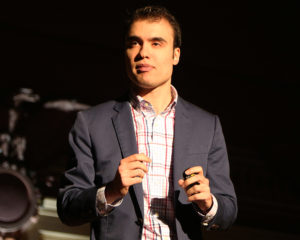 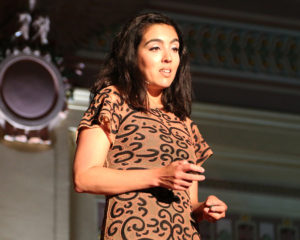 First up, author David Petrovic draws on his experiences with autism and Tourette’s to deliver a quick, well-spoken, emotion-filled plea to “embrace a difference, make a difference.” Next, First Lady of Braddock Gisele Fetterman details the origins of the Free Store 15104 and 412 Food Rescue, the latter co-founded with Leah Lizarondo, as a way to “find value in the devalued.” The Free Store, which salvages unused goods, serves 1,600 people per month. In its first year, 412 Food Rescue salvaged and redistributed over 400,000 pounds of food.

Both Petrovic and Fetterman address populations that are left behind, either through bullying and discrimination or economic injustice. While neither is a professional speaker, taken together, their talks provide a healthy dose of the expected TED Talk inspiration with concrete examples of efforts that are actively improving people’s lives. 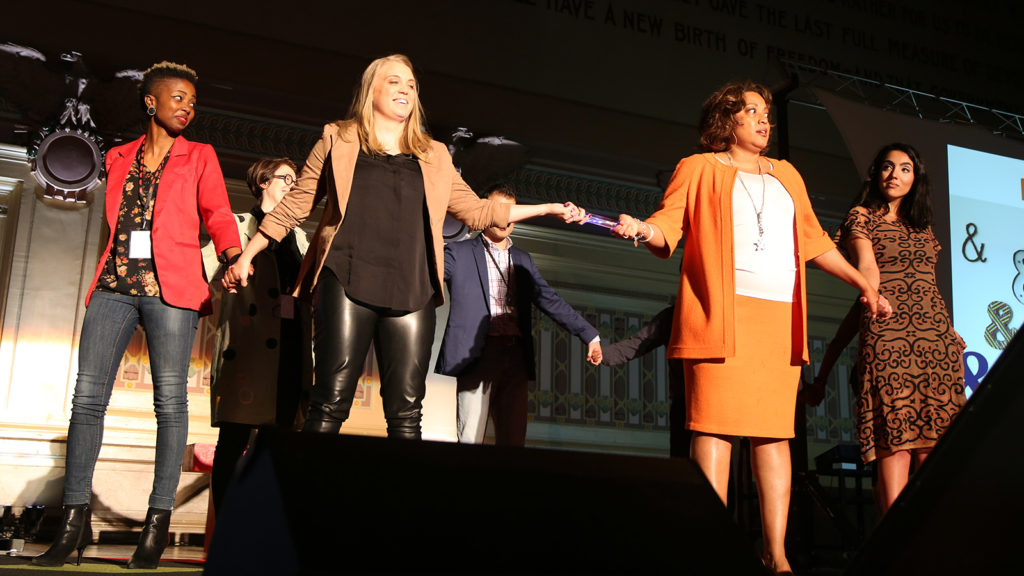 Speaking of professional speakers, Candi Castleberry Singleton is next with an appeal for diversity and inclusivity delivered with a rhythmic cadence that could not be ignored. The speech is a whirlwind of personal anecdotes (relaying the difference of phone and in-person interactions when trying to rent a 2-bedroom apartment), statistics (charting changing racial demographics in the U.S. over the next 50 years), and memorable slogans—“differences are barriers only when we allow them to be.” The talk ends with Singleton and a number of the TEDx speakers forming a circle of dignity and respect on stage. When their hands were joined, a plastic stick began to glow. When the circle was broken, the glow was too. 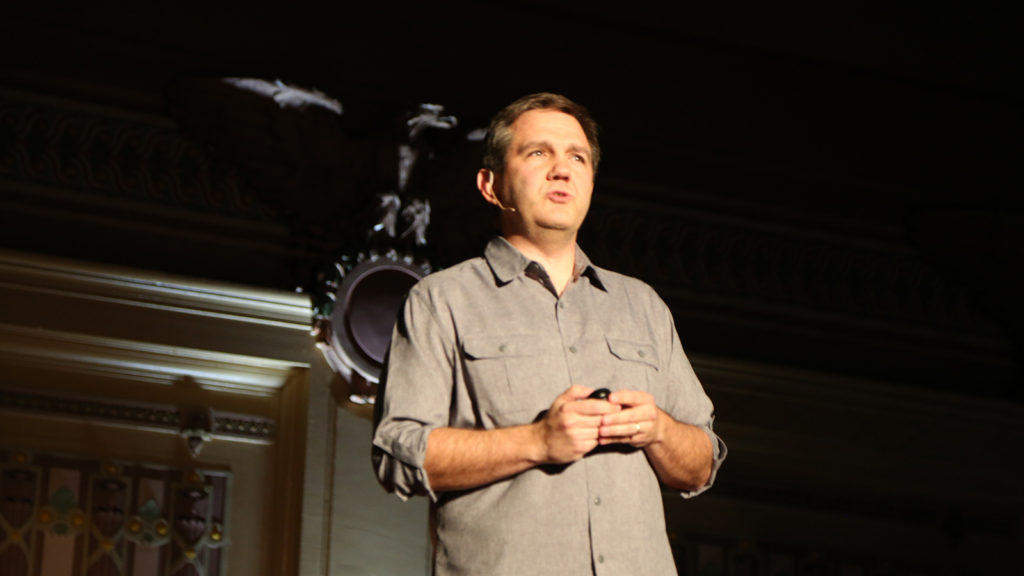 So far, we’ve heard about inequities surrounding race, income, and disability—immense, pressing social challenges that require concerted effort to combat. And so when the first session closes with a presentation from Awesome Pittsburgh co-founder Mike Capsambelis, a talk that discusses the origins of floating performance venue The Drift and a racetrack in Homewood, but is centered on a story about a $1,000 grant given to research the feasibility of a zip line (which was determined to cost upwards of $3 million, he informs), there’s a marked contrast with prior discussions of the eradication of racism, ableism, and classism. That said, the sequencing of the speakers did allow for a feeling of lightness and well-being before entering the lunch block. 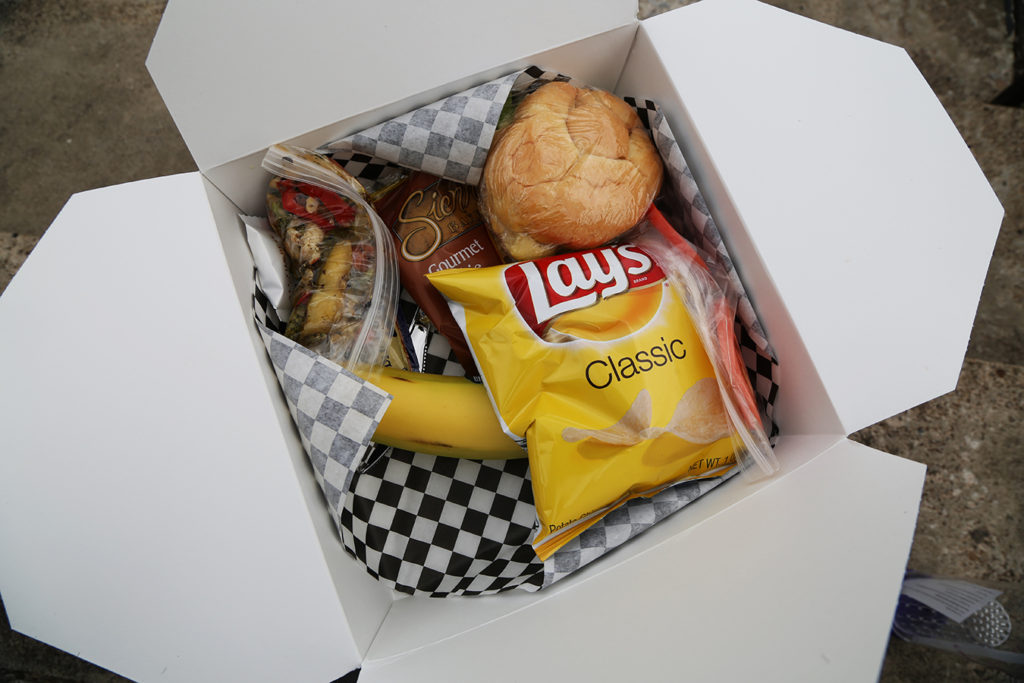 Ascending the stairs from the basement bathroom, I appreciate the high volume of stalls in the men’s room, which allowed for a steady turnover of coffee-fueled patrons. I make mental notes of everyone that “forgot” to wash their hands so I can both quietly condemn them and avoid germ transfer later in the day.

In the spirit of TED’s mission of spreading good ideas and making earnest pleas, can I offer something? Stop buying bottled water!

After returning to my front row seat, I absentmindedly reach for a seatbelt. Maybe holding my notebook, electronics, and snacks reminded me of sitting in an airplane before take-off. Maybe it was mild exhaustion. Maybe I was just prepping for more activation. 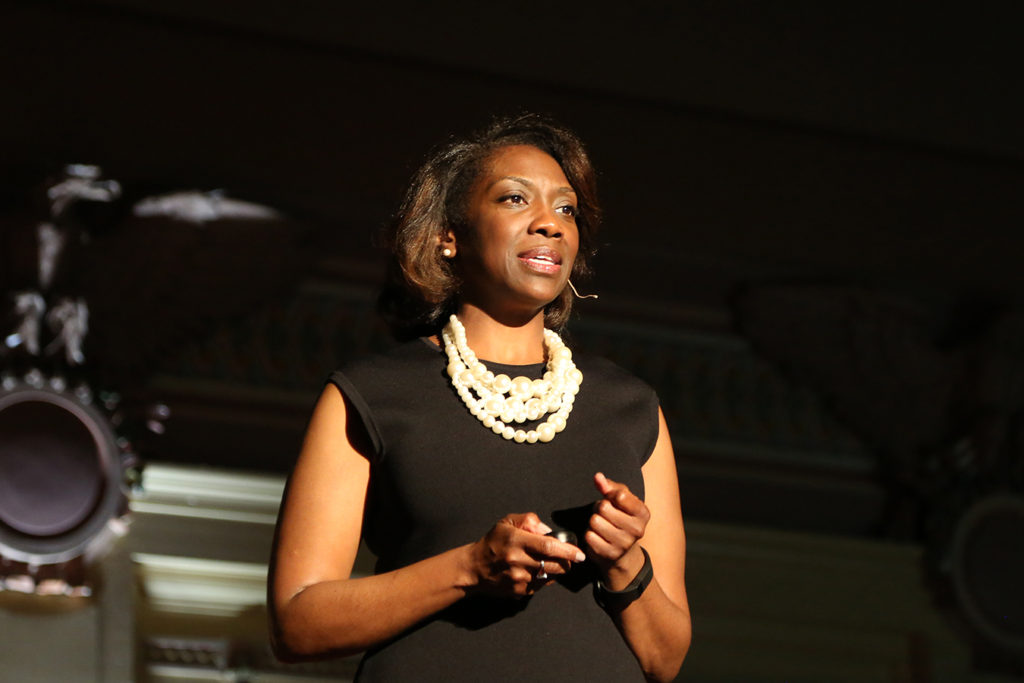 The second session begins with a sobering talk from Tracey McCants Lewis, detailing the need for personal and societal forgiveness for ex-offenders. In 2014, 401,288 people were arrested and charged in Allegheny County, and over half of them received formal convictions. Each inmate costs the county $43,000. McCants Lewis describes a “box,” both literal and metaphorical, that ensnares many of the formerly incarcerated. Literally, she’s referring to a checkbox that can be found on job, school loan, or rental applications that requires applicants to divulge their prior criminal conviction status—though Pittsburgh and Allegheny County have banned these boxes in recent years. Metaphorically, boxes exists in communities that lack opportunity in access to employment, education, and housing. One way to remove this constraint and provide a chance to self-improvement is to remove the reminder of the charge through the expungement process, which can take between 12 and 16 months, or through governor pardons, which can take up to four years. This talk is one of the more urgent arguments for a change to our justice system. 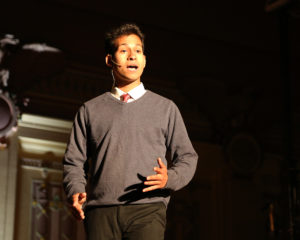 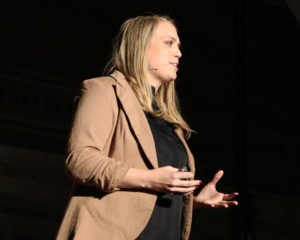 Next, Diwas Timsina takes us on a journey that started with a forced exit from Bhutan due to ethnic cleansing, to 17 years in a Nepalese refugee camp, to resettlement and life in Pittsburgh. Timsina talks about how discrimination is worse in the racially segregated Pittsburgh than in the refugee camp in Nepal. Despite not feeling quite at home here, he speaks of his desire to carve out a place in the city for himself. Then, author Lindsey Smith speaks of the differences between self-love and narcissism and asks the audience to “seek your own approval.” 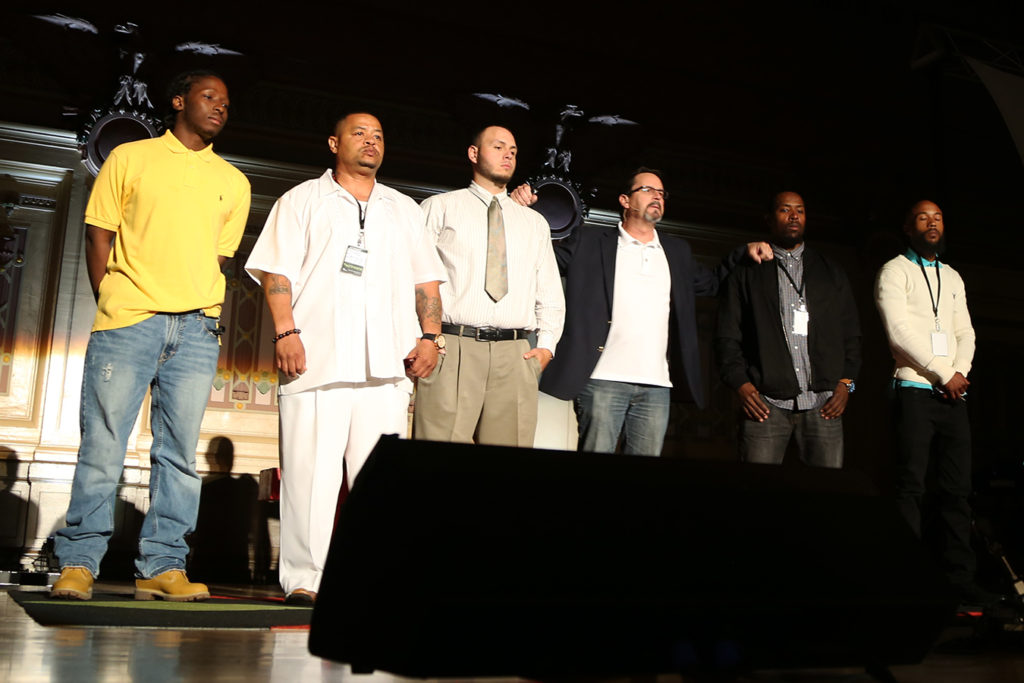 Returning to the topic of incarceration, the Trade Institute of Pittsburgh’s Steve Shelton echoes the concerns of Tracey McCants Lewis. In a slow, obviously untrained presentation, Shelton explains how the Trade Institute can train ex-offenders in masonry skills, elevating them to earn a livable wage in 90 days. 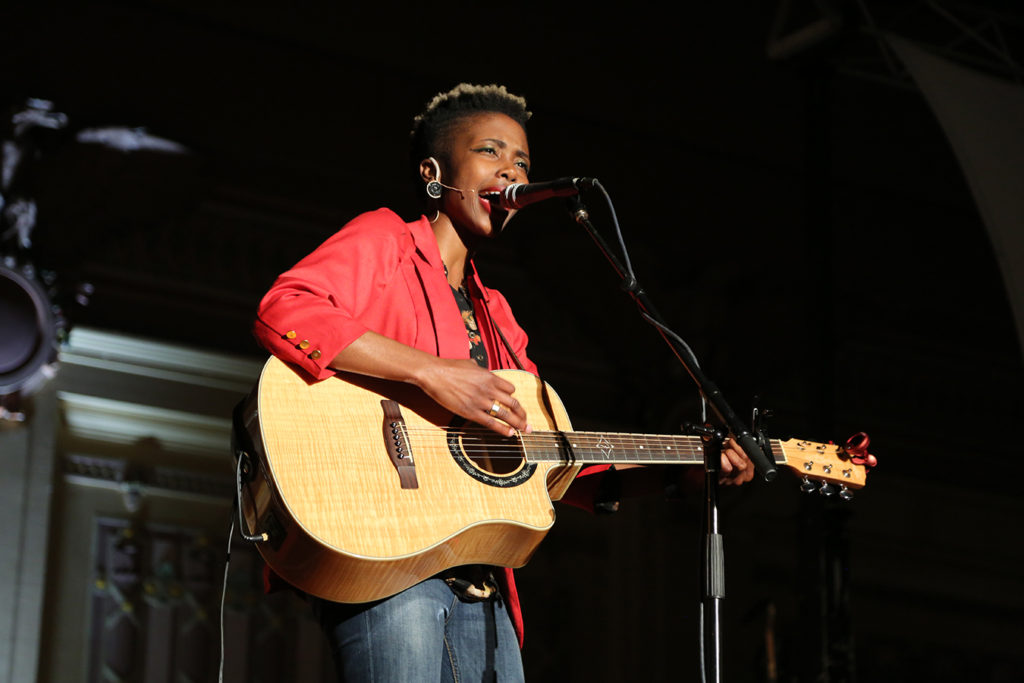 Session two closes with a needed dose of format change. Songwriter Jasmine Tate sings two songs in a wonderfully worn voice. As a section of the crowd screams, “More, more, more,” Tate leaves the stage saying, “Y’all trying to get me in trouble.” 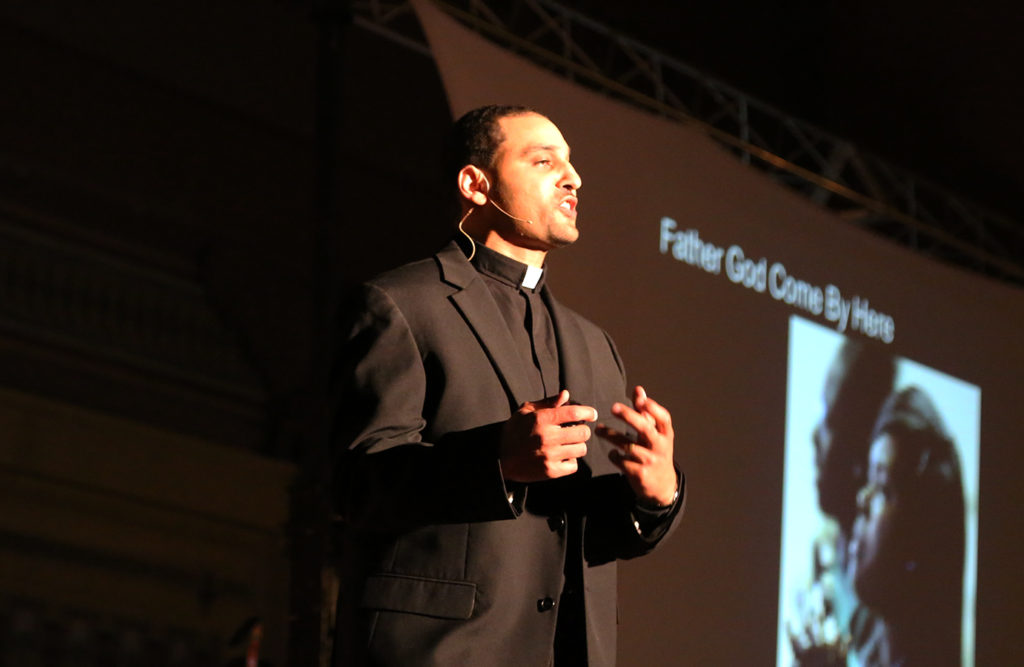 FOCUS Pittsburgh’s Paul Abernathy bursts out the gate with a fiery delivery of stories, anecdotes, warnings, and messages of hope. As a veteran of the Iraq War, Paul links combat PTSD to the 65% of African Americans who have been exposed to a lifetime of trauma. Speaking to the need for healing in Pittsburgh communities, he equates lack of ownership with lack of power and autonomy. And Abernathy speaks about the impacts of hunger, noting that, “If someone’s hungry, they’re not listening [in school].” The talk is a call for communities to devise their own plans to revitalize communities and not be subject to external concepts of what rejuvenation should look like. I’m reminded of other Pittsburghers who are working toward this same important goal. 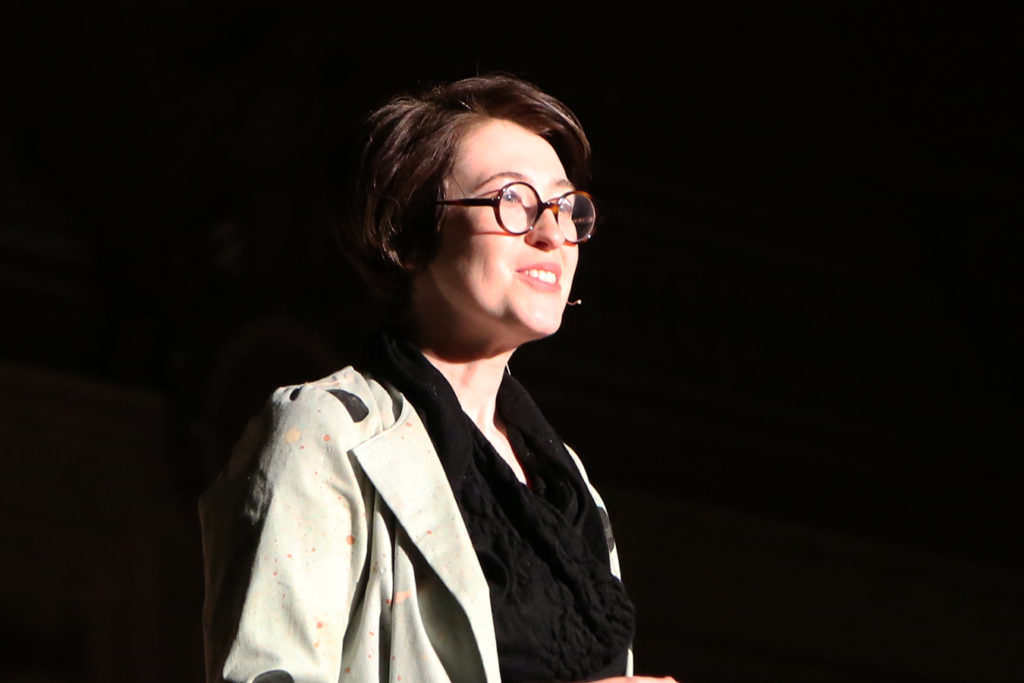 So far, the day’s speakers have spoken of urgent global concerns in a local way, but the remaining talks focus on different niches: collaboration in art, self-driving cars, and symphony programming. Cultural producer and artist Casey Droege has the unenviable task of setting a new tone. But with great success, she humorously tracks how her upbringing has influenced her recent projects—specifically the SIX x ATE dinner and lecture series, which brings together six artists, a chef, and an audience eager to dine and discuss art—and discusses collaboration as a way to build an audience for new art. Using a knit sweater metaphor, Droege encourages the audience to make small changes in our lives as ways to break patterns and spark new interactions. 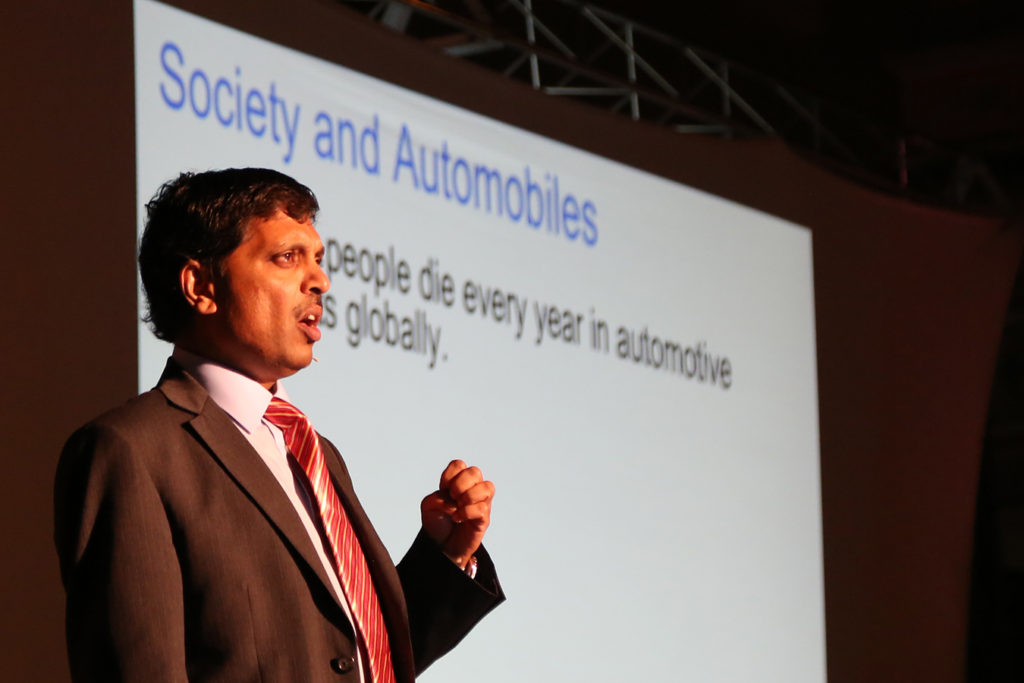 While I am generally wary of all things Uber and all things that involve military spending, Raj Rajkumar’s briefing on the self-driving car is enlightening. The CMU professor cites reduced auto accidents and increased transportation access for the elderly as two key arguments for the dawn of the driverless car. Recently, CMU’s “Boss,” a self-driving car, won a military-sponsored competition. The competition had a number of limitations (no cost limit, no pedestrians or cyclists, 30 mph max), but it pointed to a promising future for people who prefer board games or TV over driving. 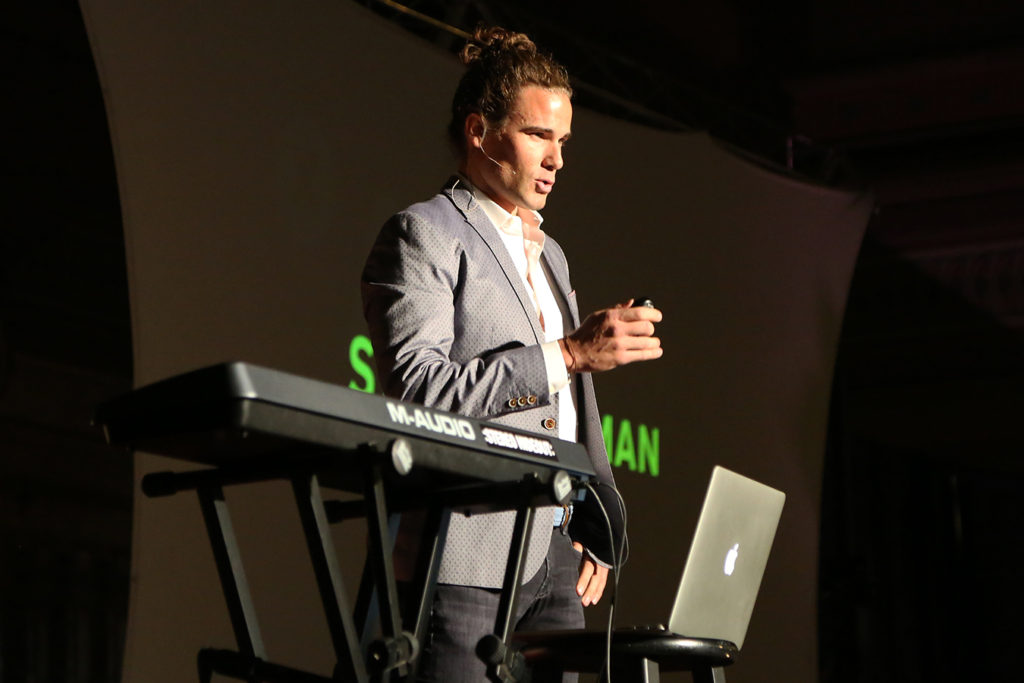 For the final talk, a keyboard is brought out onto the stage. Steve Hackman, the Creative Director and Conductor of FUSE at the Pittsburgh Symphony Orchestra (PSO), goes on the defense to justify his recent symphonic mash-up concerts, which premiered with a Brahms–Radiohead fusion last June. Hackman demonstrates his approach by playing examples of similar musical passages on the keyboard along with screening video excerpts from the concerts, including the second in the series, which paired Beethoven and Coldplay. Despite my general indifference to Coldplay, Hackman’s attempts to bring the PSO to a new audience are noble. I’m reminded of the Deutsche Grammophon Recomposed series, which was met with much less public outcry. In one release, electronic composer Matthew Herbert took the final adagio from Mahler’s 10th symphony and re-recorded it in specific places of death. 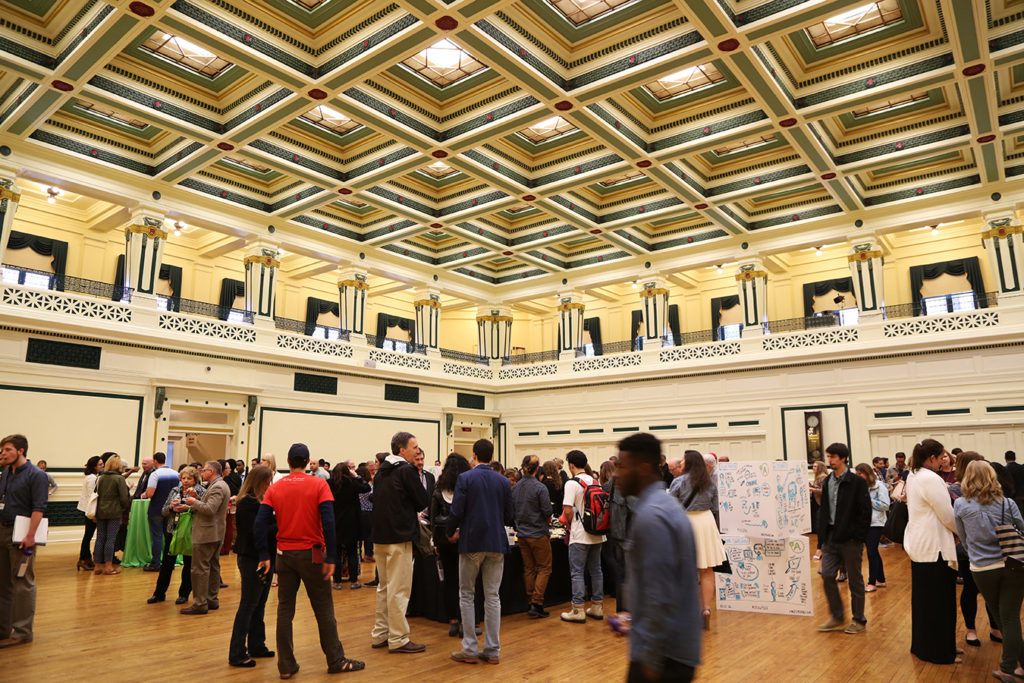 Feeling very satisfied with the talks, I climb the endless series of stairs that leads to the after party. I fill up my water bottle in the bathroom. I eat a carrot. I “activate” with a few people and think about the follow-up emails needed to solidify these new collaborations.

At this point, TED Talks have a mixed reputation. The talks are easily digestible jolts of inspiration. Stories of creativity in action, or successes, or failures transformed into successes. A predictable format for conveying a story, an idea, or a product. A cult of awesome with no recourse for argument or discussion. A sales pitch.

But no matter what you think of the TED Talk brand, TEDx, the local, self-organized arm of TED, allows for discussion centered around place. Pittsburgh has seen an increase in homegrown discussion groups and panels. While these events have been awesome, enlightening, scary, or powerful, they lack the marketing that can draw large numbers of Pittsburghers. TEDxPittsburgh has the potential to leverage a brand name to expose important issues impacting our city to a wider audience. Given that context, this year’s TEDxPittsburgh successfully curated a diverse panel of dedicated doers who are trying to make Pittsburgh better for everyone.