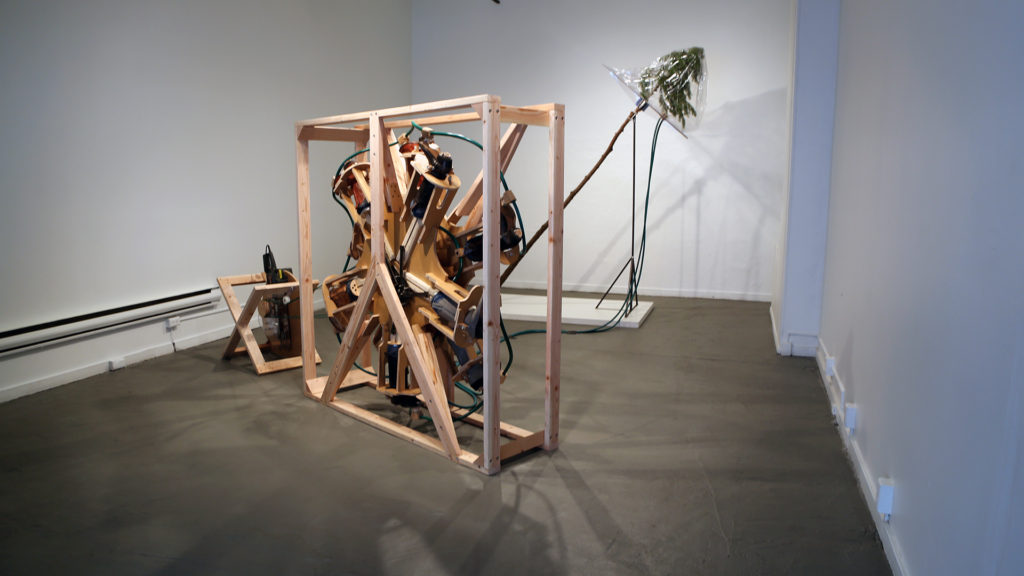 A room-sized machine. A chainsaw, boots, a tree. At 709 Penn Gallery downtown, installation artist Natalia Gomez and The Glassblock’s David Bernabo spend a good deal of time trying to crack the system of Sean Derry’s Homage for this edition of The Object. 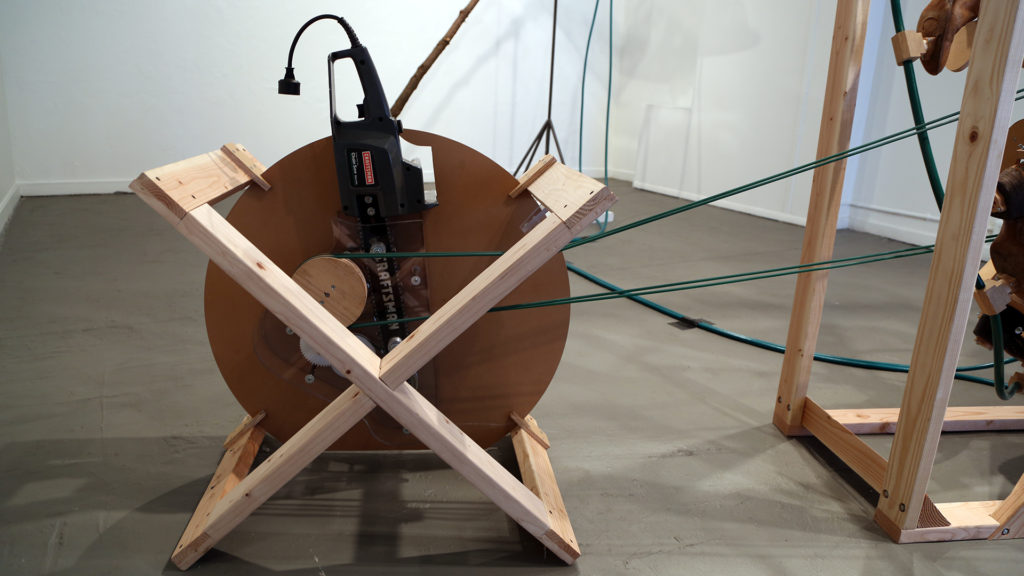 Natalia Gomez: One of the best things about this work is that it is an empty room except for the single, gigantic piece that fills it. Going into the show not knowing anything about the exhibit makes you really consider the purpose and its scale in relationship to you. I mean, we just spent ten minutes trying to come up with the logic for the kinetics of the piece, which still really intrigues me—where’s the “on” switch? 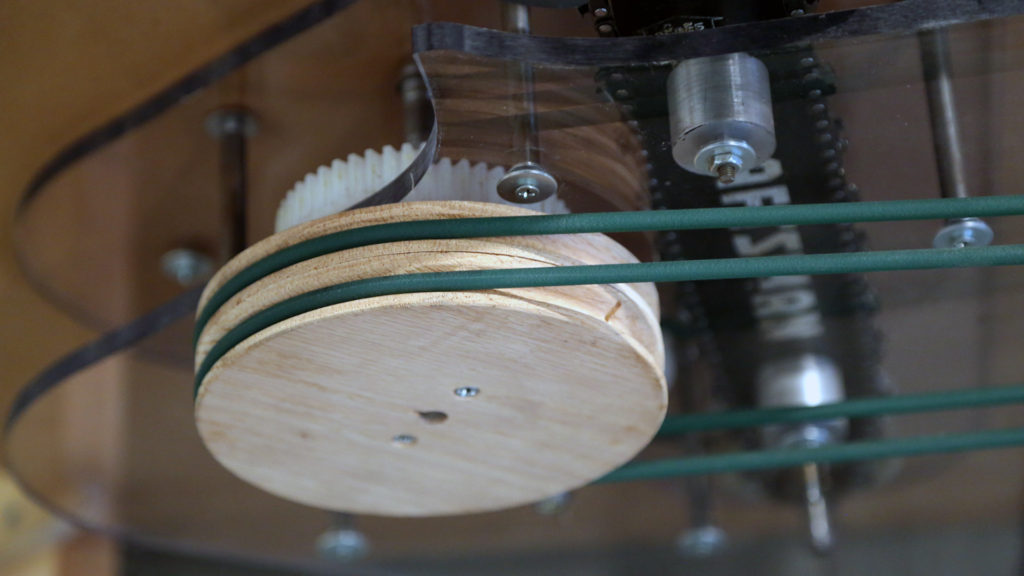 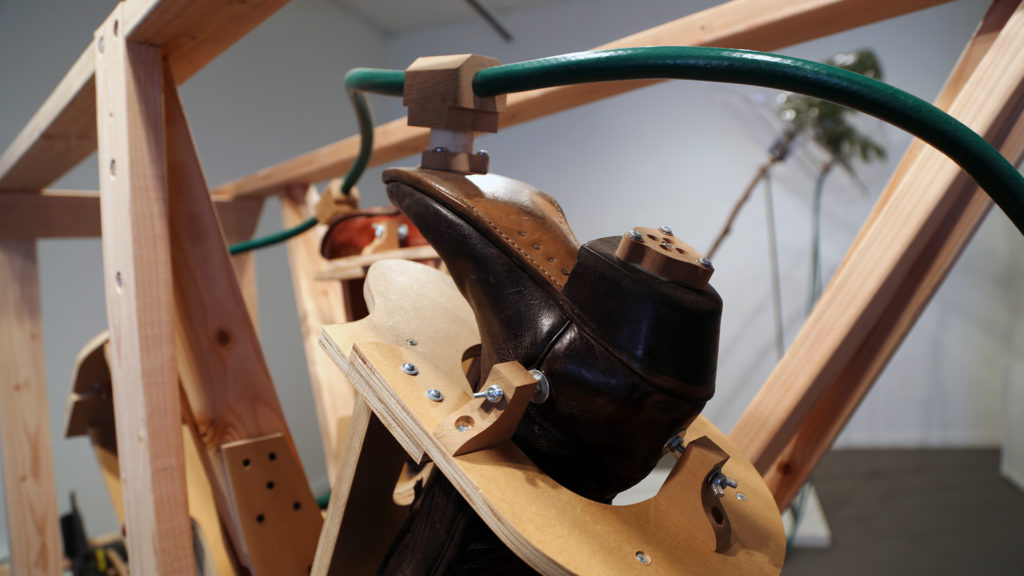 David Bernabo: Should we explain the components of the piece?

NG: When you walk into the space, there are two components.

There is a kinetic element that is made up, in itself, of two pieces. The system starts with a structure that seems to power the piece. There is a chainsaw that appears to generate power and direct air movement through green tubing to a star-shaped structure. The star-shaped structure rests in a crate with cowboy boots covering what appear to be pistons, two green hoses, and a mechanism at its center that seems to turn in some way. The green tubes runs to the second component, which is a small, white floor platform that holds a stand and a pine tree—maybe a sapling—that is covered by plastic. The green tubes extend from the boots on the first component and into the plastic covered tree. It’s very complicated. 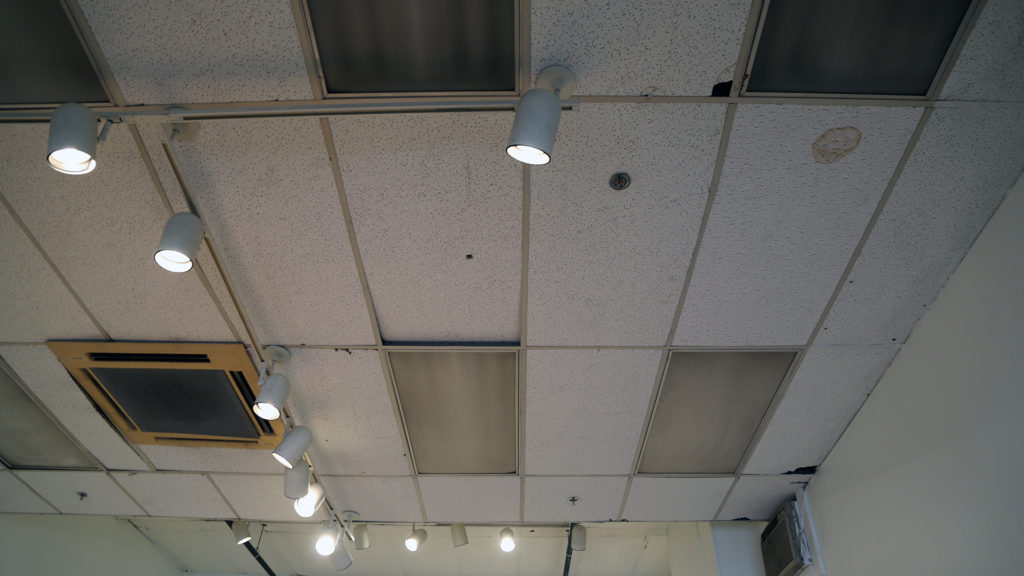 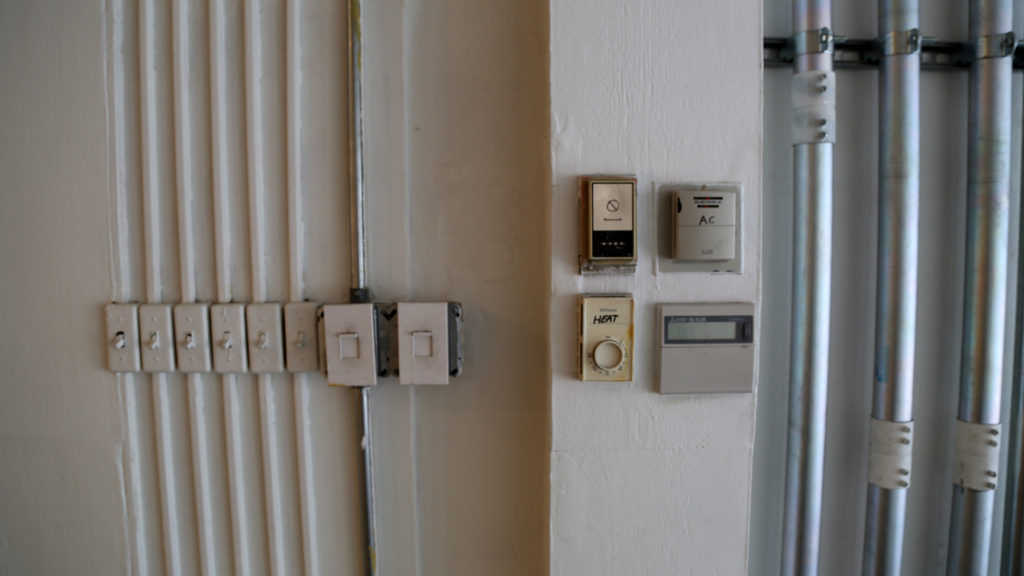 DB: The one thing that immediately strikes me is that the 709 Penn Gallery is the toughest Cultural District gallery for an artist. It is more challenging to do a show here because the ceiling already has so much information—from the insulation to the water stains to the drop ceiling to the row of light switches and the lighting—but this show bypasses all of that. When we walked in, I didn’t notice the gallery at all. I only saw the artwork.

NG: Yeah, the piece totally defines the space. In traveling around the piece, it negates the existing architecture, because you are being defined by the piece and not the walls. It’s its own ecosystem. There is a plant element, a mechanical element. The boots have a human element. The piece asks you to activate it, to solve it. Is this some sort of post-apocalyptic frontier?

DB: There’s an element of westward expansion with the cowboy boots and the chainsaw. Razing timber and forests. 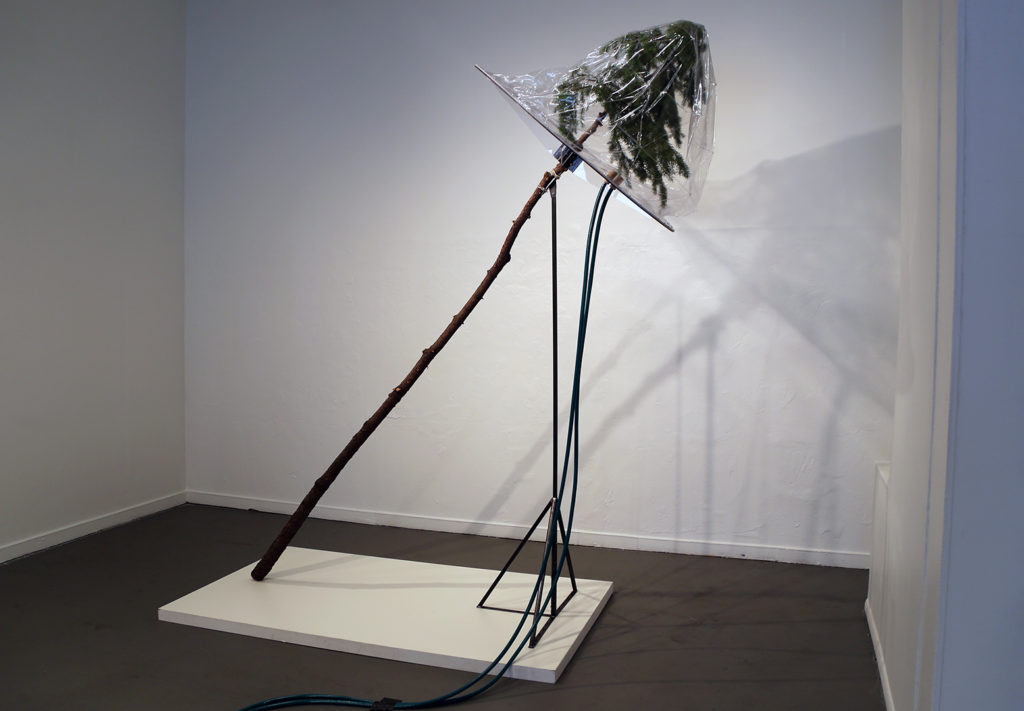 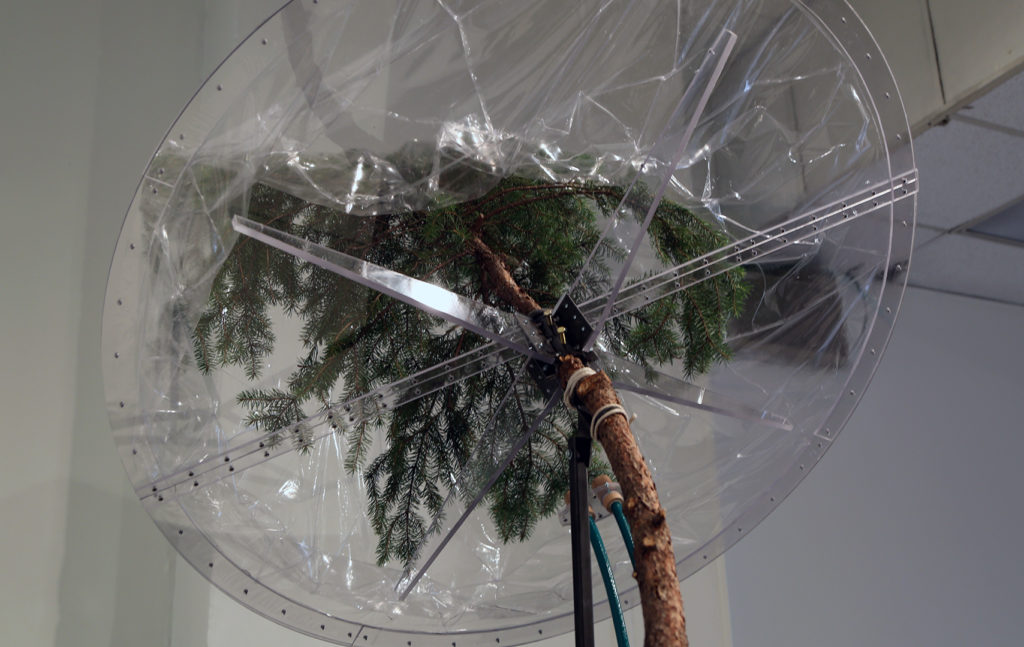 NG: Maybe this is the last remaining tree. There’s definitely a handyman vibe. The structures are incredibly well-built. Everything has the appropriate joints. Really nice attention to detail on the junctions. Even the plastic bag that hangs over the sapling has been beautifully seamed from triangular pieces. All these elements point to a strong logic within this system. So, it points to the frontier, but it seems like this is a science lab of how we’re going to survive the future.

But even without venturing into the future, the piece makes me reflect on our impact. The machine seems to pump air out of the shoe soles. So there is a direct action from footprint—the human—to the tree, to nature. 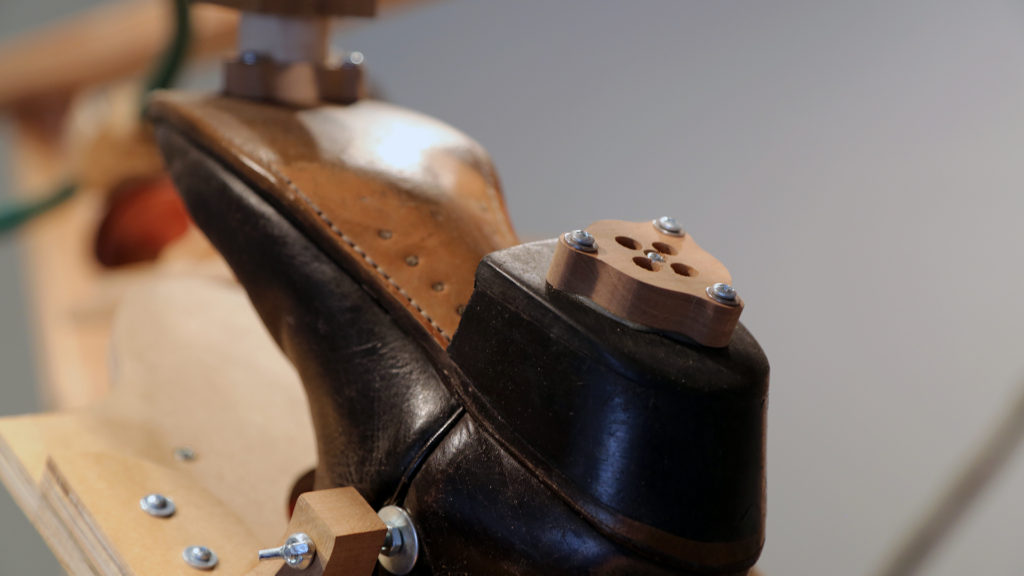 NG: Something to note is that these objects are so beautiful by themselves. The use of color and line is so incredibly well-done. We have these two hoses that, visually and logically, circulate your perspective back and forth between this natural, human-supported sapling and this circulating machine. What was your first impression when you walked into the gallery?

DB: I thought about the construction and the labor involved in creating this. This is an aesthetic—clean, mechanical, precise—that I gravitate towards. I was also intrigued by the fact that the piece doesn’t immediately reveal its meaning. I mean, I also like seeing trees and branches and greenery in art work, in general.

NG: There is something incredibly strong and compelling to see nature in a gallery.

DB: It’s like when you see a tree in a mall.

NG: I am all about weird, manipulated nature. I think it is the most fascinating thing that we, as a society and culture, do—to check the box off of nature being in places in leisure. And this is one of them. We’re in a gallery.

DB: I’m interested in the idea of human superiority over nature. It feels like this piece is a machine to fix nature, when instead maybe humans should just stop living and just let nature do its thing. Look at how much wood is required to build a machine that fosters tree growth. But I really love the convoluted step-by-step process where all these things need to happen just to revive an organism that would exist naturally if we didn’t interfere. 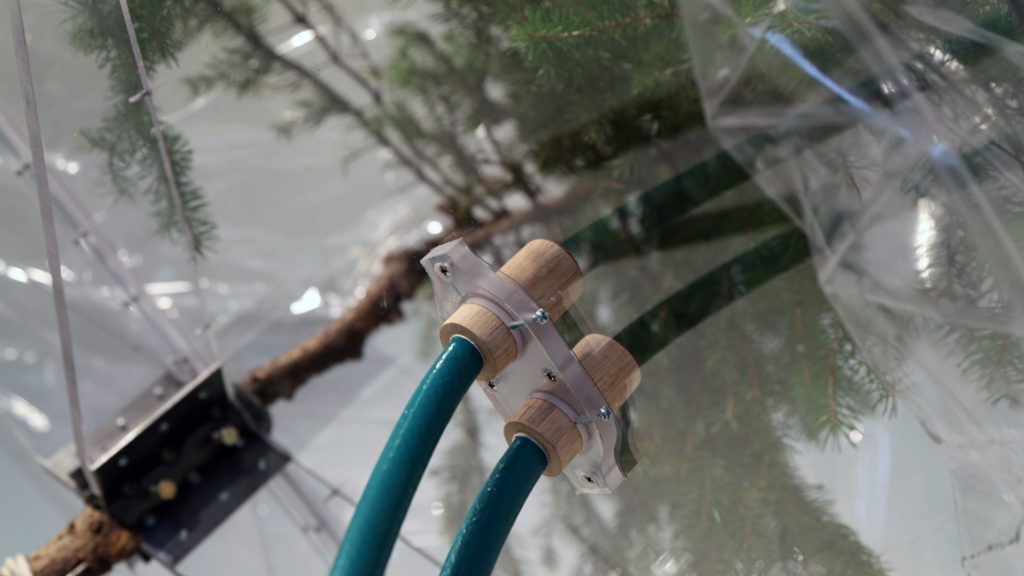 DB: If you look into the plastic bag, it looks like the two hoses from the boot machine are plugged.

NG: So, this makes us realize that our entire visit here—looking at the logic of the system, the story that we created , the world in which this machine would operate and what the machine would do—is just fabricated. This piece was never meant to function. That’s a really fantastic gap that we spent so much time filling. It’s great that the artist has given us room to do that.