After living and working in Colorado, San Francisco, and Chicago, dancer and choreographer Jean-Paul Weaver was drawn to Pittsburgh in 2014 to perform in Anthony Williams’s Loving Black, a complex, genre-mixing, physically and emotionally heavy dance piece that explored black male identities. Since then, Weaver has been creating dance works that feature his unique and powerful movement language while also dancing with Texture Contemporary Ballet, STAYCEE PEARL Dance Project, and Shana Simmons Dance. This Saturday, May 14, Weaver will present a new work, Madonna Gris, incorporating animation by Willyum Beck, installation art, and sound, at the seventh annual newMoves Contemporary Dance Festival at the Kelly Strayhorn Theater. I met with Jean-Paul Weaver in his home for a conversation about his recent work and its connections to his Haitian identity, queerness, and Voodoo.

[This interview has been edited for length and clarity].

David Bernabo: Is your solo dance for newMoves related to your recent work, like Vwayaj, the piece you choreographed for Texture Contemporary Ballet?

I first started studying Voodoo because I thought that it was really important to spark conversations about the political, social, economic—everything surrounding the religion is a huge obstacle, not because the religion is an obstacle in itself, but because people are making it an obstacle. Oftentimes when I speak to people about Haiti, they tell me, “Well, it’s the Voodoo. That is what is making the people so poor.” Really intelligent, college-educated people actually believe that. So do most of the not-for-profits that work [in Haiti]. Also, there are organizations, like Baptist Haiti Mission, that prioritize their funds toward evangelism and Christian education. Voodoo has a very strong stigma attached to it for Haitian-Americans. So, we have to talk about this.

The loa [spirits in Haitian Voodoo; intermediaries between Bondye, the unreachable Supreme Creator, and humanity] are so powerful. And because the Haitians prayed to the loa for the revolution and they won, the European world, in general, has been trying to use anything that empowers African identity to cause downfall in certain countries. So, Hollywood has horribly racist depictions of Voodoo that are horribly inaccurate. Because Haiti is so impoverished, the realities that we see manifesting in Voodoo are more of a reflection of the social economic injustice and how, for 200 years, Americans have been exploiting the poverty of Haiti for their own capital gain. If you look at the reality of a community of people and how their macroeconomic understanding of the world has not left their community because they are so impoverished, when they get sick they’re going to have a very different spiritual understanding of what that means than someone who is living in America.

DB: How do you take the complexities of the various inputs and influences and translate that to movement?

JP: Before I go into the studio, I research a lot of things, because I want to be driven by the ideas and the narrative. Then, I play the music and start to develop what naturally comes out. So, it’s not meant to be so literal, because you need to leave some nuance there. But having the concept as the current that pulls me through the creative process, then I can think, I don’t really know how that relates, but it feels good, so let me explore this. If movement is manifesting, there must be something behind it.

Regarding aesthetic, it really depends on who I’m working with. It takes on a different aesthetic when it is just me and my body. When I’m working with other dancers, like Kiera Brinkley, for example—she has a very different body than me because she is an amputee. That’s the beauty of collaboration. The way I approach the movement changes due to how Kiera approaches the movement. The same thing happened when Texture Contemporary Ballet performed Vwayaj, because there was a huge range of body types that were beautiful and wonderful. Each of us came up with our own steps based on individual limitations and strengths.

DB: What other ideas from Haitian culture are contributing to Madonna Gris?

JP: For me, the piece is a lot of things. There’s the queerness of Erzulie Danto, the Black Madonna. She’s the goddess of love. While you are collaborating with her, you can be physically attracted to men, to women. She represents some of the trans spectrum. It is believed when Erzulie calls to a man, she make them gay. There’s a history of queerness that’s written in Voodoo, which shows that there have always been queers. And that there have been spaces for them and spirituality attached to queerness.

The piece takes a Neo-Voodoo approach to acknowledging my ancestry and my history by not being afraid to create my own rituals and being able to make my own rules within the lens of my cultural ancestry. I can still have a spiritual connection to all this history, but I don’t have to be controlled by it. The slavery mindset is a reaction to Haitians having been slaves. Voodoo came out of slavery as a way to free themselves. There’s a residual psychological oppression that has laid dormant for 200-plus years and has been perpetuated through economic warfare and severe poverty. When you’re in an impoverished community, it would make sense that the loa would be wicked and would punish you regularly, because you are dealing with inhumane conditions.

DB: How do you approach the research part of this project?

JP: The beauty of being a millennial Haitian-American, I can access my culture through the internet. A lot of the stuff that I’m finding, until the internet arrived, you would not be able to find unless you were in a community of Haitians, which I did not grow up in. I grew up in lily white Littleton, Colorado. Fine, I’m half-white and everyone looks like me kind of, and I can see myself in them—but I never got that Haitian history, that identity.

But an important aspect of Afrofuturism is being able to connect through the internet and how that revolutionizes African identity. That’s a huge part of my narrative, the influence of the internet.

So, the internet grants a global perspective, which is very much lacking in Haiti, because 70% of the population cannot read. Instead of building churches, maybe we should be building libraries and solar-powered wi-fi hubs where people can start to educate themselves. Realistically, that would be the quickest way to educate the country. Many of the [relief and aid] organizations that go to Haiti are helping themselves before they help other people. I truly believe that the internet will energize Haiti. I want Haitians to have a choice of what they want to learn.

DB: So, that idea of choice is central to the conversation on equity?

JP: Yeah, I don’t think that choice should be a privilege. It seems like it is in America. And it especially is in Haiti.

DB: How do the conversations, like that one we are having now, relate to Madonna Gris? Is this conversation part of the piece?

JP: I think that the piece is the tip of the iceberg for me. The piece is my way of sparking conversations about [issues in Haiti]. I have an audience. Hopefully, 200 people. [He laughs.] I hope that by talking about Haitian culture, more Haitians will speak up. 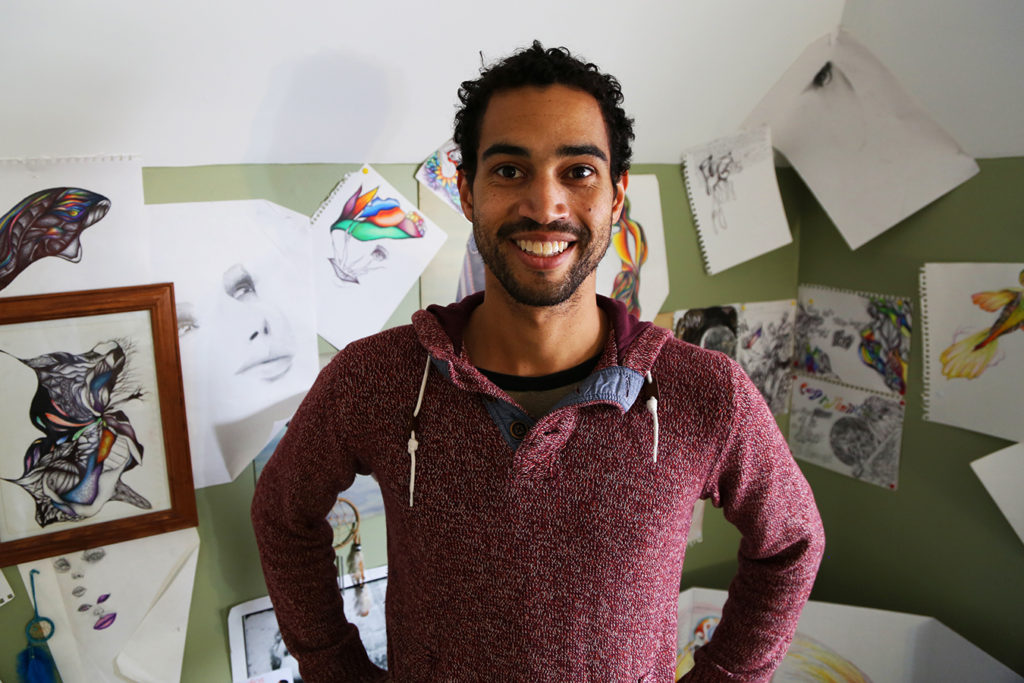