“The more enlightened houses are, the more their walls ooze ghosts,” Italo Calvino offered in a 1967 lecture. In their 2015 chapbook hamnett house histories, writer Marlee Gallagher and illustrator Greg Sciulli spun the spirit of the houses in their neighborhood—some long-vacant and on the brink of demolition, others still animated—into a collection of prose poetry. In a two-part series for The Glassblock, Gallagher and Sciulli share their sketches. See part one here. 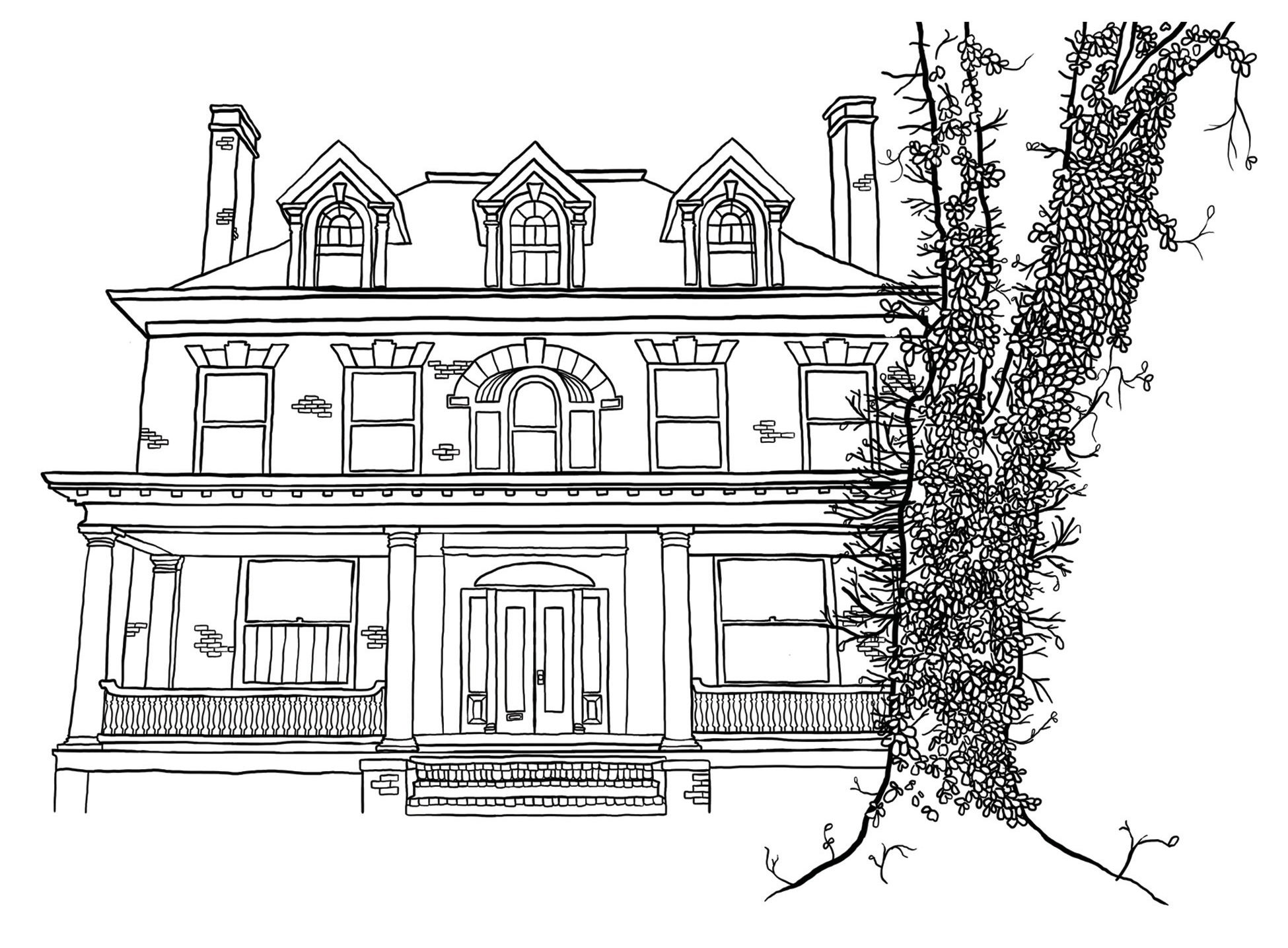 She knew it would be hard, but then there was time. To her, time was this great universal healer of heartache and, well, other things, too. Time was so amazing to her, she began to wonder what the point of anything was. She just had to figure out how to bide her time between the now, in the midst of the heartache, and the then, after the heartache.

She went to talk to Albert, the neighbor, who’d just lost his husband too, but to cancer, not sociopathy.

“Sometimes you just need to walk away from it all. I call it trimming the tree of your life,” he said, simultaneously calling to Stevie, the nurse, and squeezing a lemon wedge into his tea.

She stared into Albert’s rhododendrons, imagining her tree, old and knotty with twisted branches covered by a great pile of moss and leaves. She pulled out of her daydream as a burly man walked into it, towards her limbs, twirling a growling chainsaw back and forth over his head and between his shoulders. This was more a memory than her imaginings. She’d seen this exact man before at a hayride out in some thick Pennsylvania woods where people sincerely say you’nz and eat mountain pies.

She turned her eyes to Albert’s. His advice sounded a bit more like topping her tree, and potentially killing it, than doing some necessary seasonal pruning.

Before she could fall back into the dream and get sliced open by a wild lumberjack, she paused. She’d walk away, yes, but she would take some things, some useful things, and some things that would merely evoke memories and enable tears. Like bloodletting, but for depression and anxiety. These things mainly consisted of little scraps of paper, typewritten pages, and journals full of lists that she’d shoved into bins in the many rooms she had lived over the years.

And one October day, as Albert advised, she took them and she left. It was an unseasonably warm fall, and everywhere the leaves still clung to their trees, sparkling and red like a bad mall manicure. 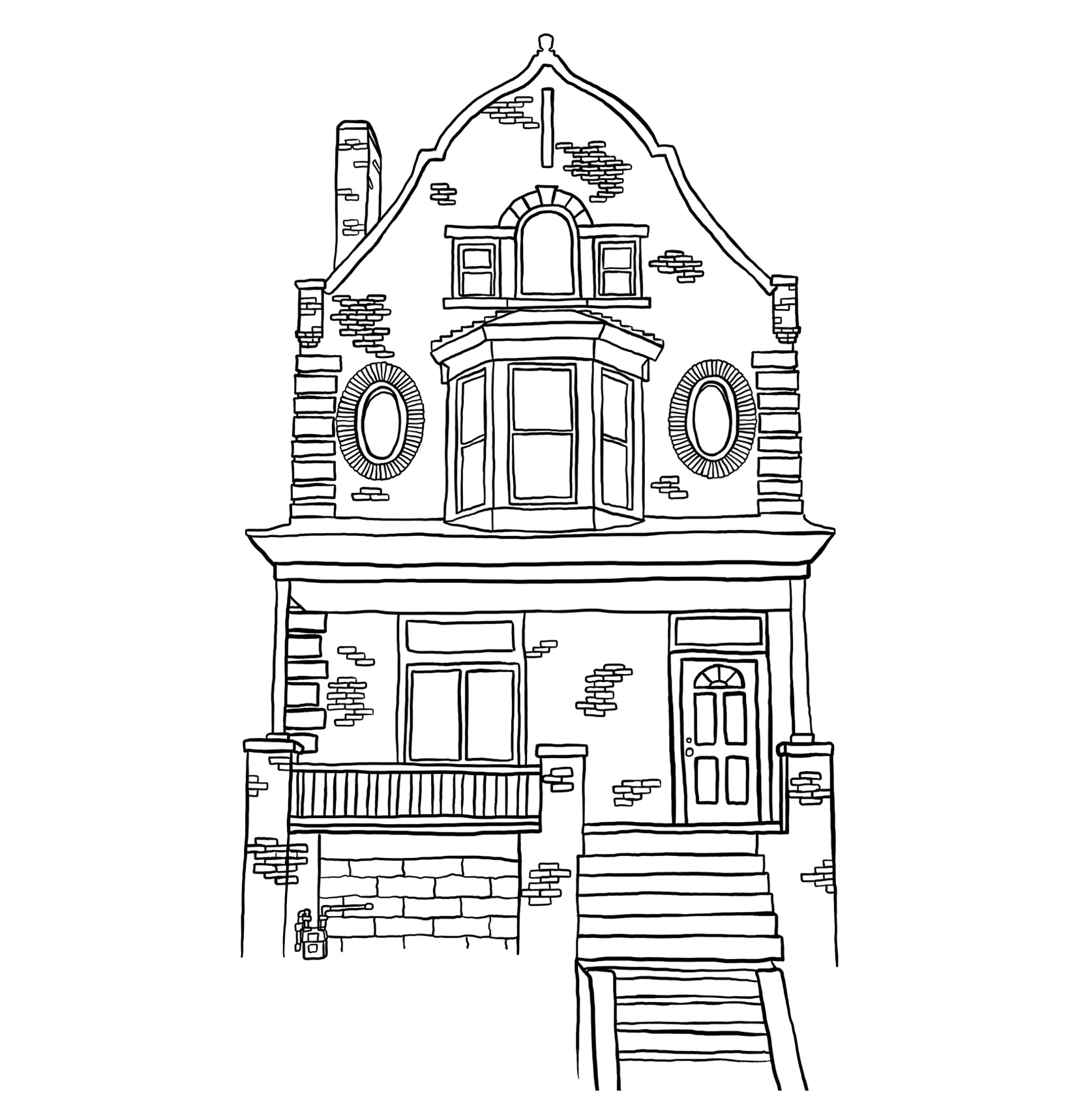 She was back from Texas where she spent a late fall weekend with her now ex-boyfriend, swimming in a kidney-shaped pool, blue and silent. She was a lister and a person full of irrational regrets, so she made a list of all the things she couldn’t take back. Lungs burning in dry winter air, her long-lost dog, queuing up a love song before the trip, too many in-flight vodkas.

Silver maples lit up by warm Christmas bulbs, the old banister covered in a hundred years of soot, a crawl space above the garage, sun between two thick West Virginia mountains, her long-lost cat, slow music between a row of arbor vitae, Allegheny Cemetery at three in the morning, trapped at high tide on a boulder barely tall enough.

Mom’s mushroom canisters, falling asleep in a dark hammock, her long-lost scarf, floating above three hundred feet of dark water on a kayak, finding Batman among the headstones, heart-shaped cocktail stirrers on Southwest.

She stopped and thought, it’s just their branding and not about love at all, huh? 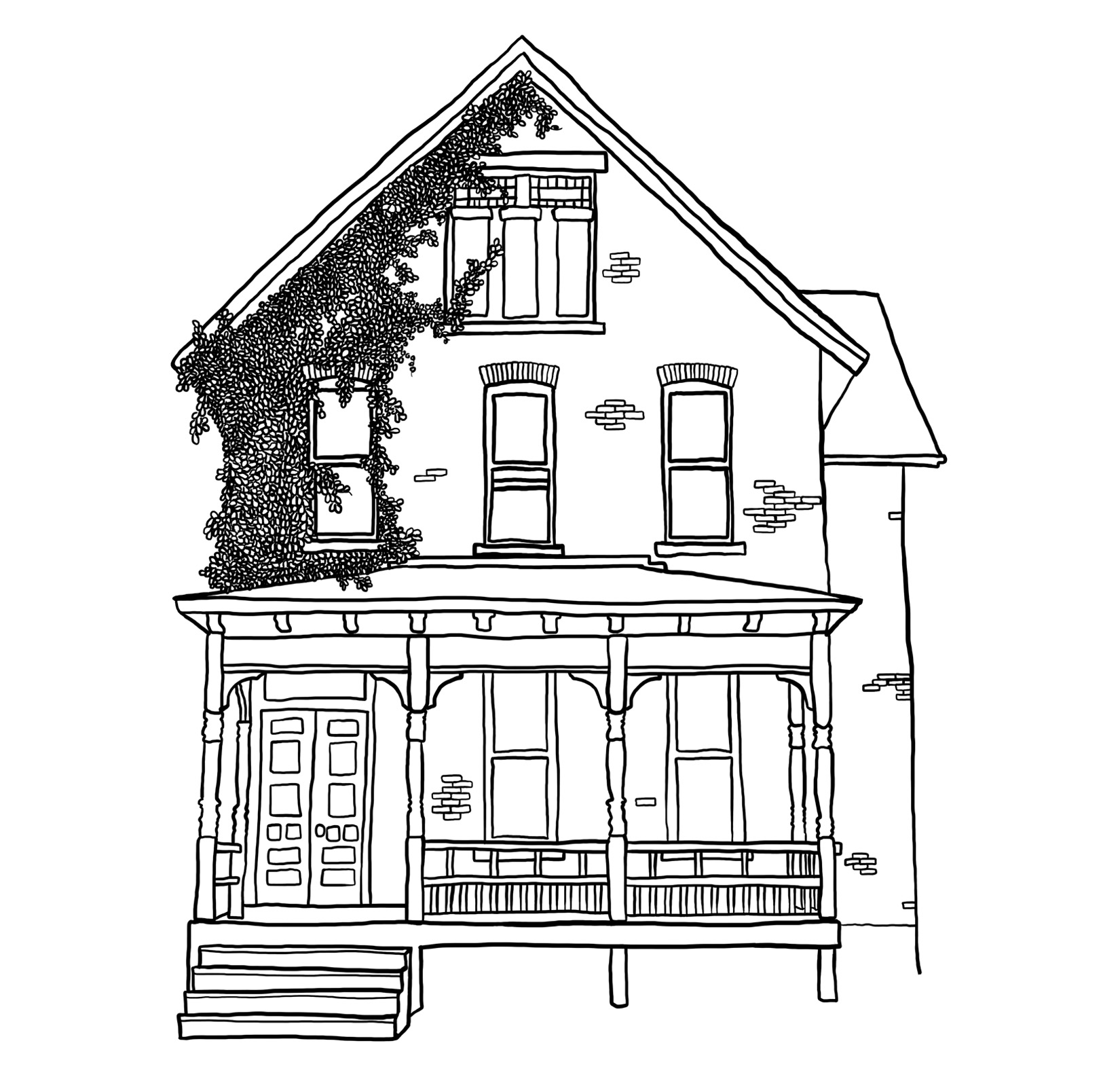 She thought about their lives those first few days in the old house, slicing up dry, cold fingertips with bare razorblades. They didn’t speak most days, so she’d go upstairs and wash and scrub and wait and wipe the floor again with vinegar water. It was a cold February without the radiant heat. She never fully felt her hands.

In those instances when they spoke, it was by way of raised, insulting utterances. Naively, she thought their many arguments would end in a deep, understanding embrace before bed. Because the words didn’t mean what they said. She took hers back almost immediately.

She thought of him, alone, sometimes. How weird it was to see the housewarming gifts now all out of place. As if inside the enameled bowl was their path, woven between warm, red speckles. As if within the pages of the book of houses was, after all, the person she imagined when a swarm of birds would fly overhead and her mother, like her mother’s mother before, would say, my wedding.

As if, though her therapist advised against it, she could make sense of the senseless. Just let those violent thoughts float away. 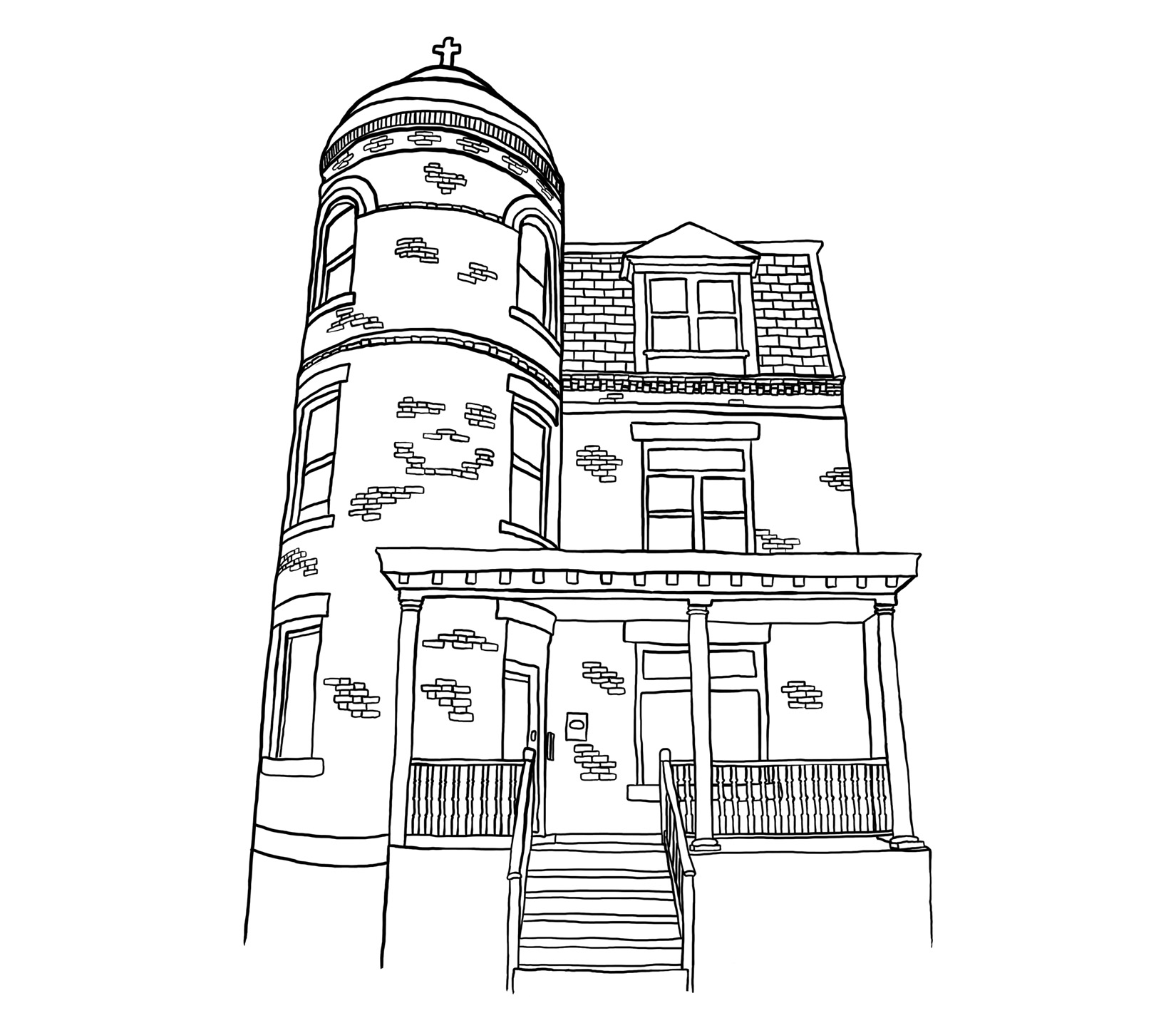 He made her feel crazy. Though she was quite normal, he thought everything she did was strange and wrong. He knew his mother could do it better.

When he died after 52 years of marriage, she rarely left the house. She got into Wiccan witchcraft and started putting curses on the neighborhood children; curses which were wholly unrelated to the craft she’d been studying. She made them up when she’d walk the streets at night with Stan, her German shepherd dog, picking through people’s garbage and pieces of demolished houses. She would display the findings proudly on her lawn, among broken concrete and planters and years, decades really, of dry dead leaves.

Out of spite or rage or simple forgetfulness, one day she lit her porch on fire, sat Stan upright in the front seat of her Saturn, and left. 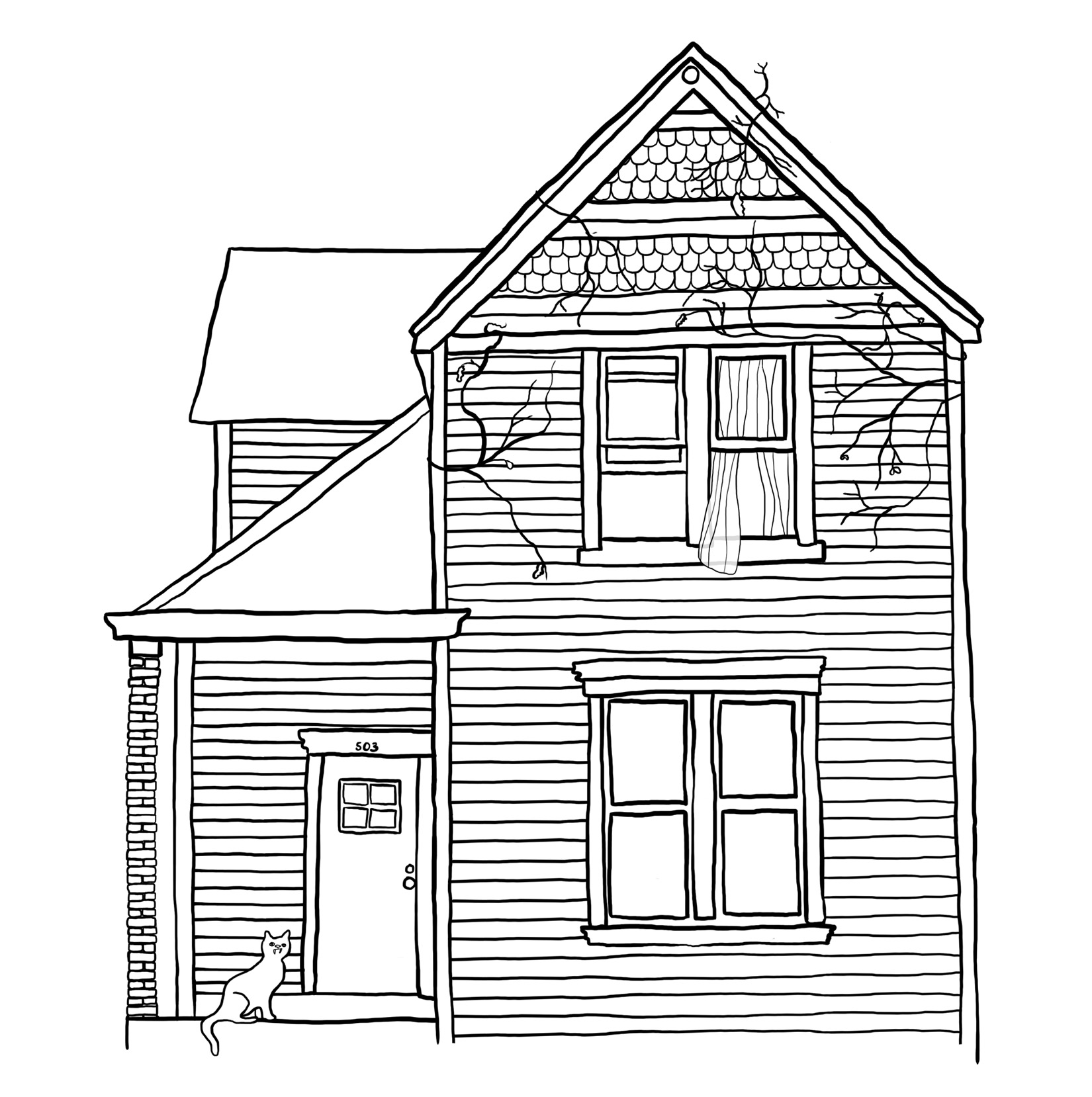 Back then the landscape here was different. Where houses cut between lines of perfectly pruned bushes were broad thickets. The paved avenues and streets were nothing more than dirt carved for decades by Native Americans and settlers. There were no tunnels or cars; Edith Wharton was just being born. There were no glimpses of the moon; there were no houses; the trees grew in wild piles, exhausted limbs embracing one another. It’s hard to imagine that this place didn’t even exist, just this singular house on a street that wasn’t even a street.

And now, here she was on the other side of the house’s long life, watching it slowly sink into the space where it once was so proudly placed.